Is it Witnessing History if You Have to Leave Early?
Search
Skip to content 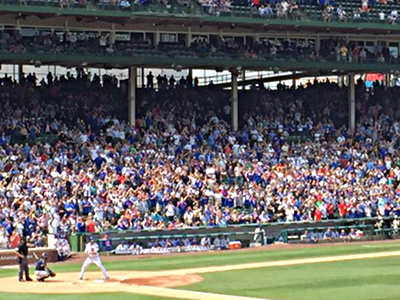 One of the most unique streaks in baseball history ended on Saturday afternoon at Wrigley Field and I was there to witness it.

I guess this counts as a no-hitter ticket stub. pic.twitter.com/NtiUgOOtnn

I had never witnessed a no-hitter in person, though it had been something that was always on my bucket list. I covered some softball and baseball games at the college, preps or independent league level that went deep into no-hit bids, never one that ended with a team being hitless.

Saturday’s loss to the Phillies stung. But some day in the future, I could share stories of attending Cole Hamels’ no-hitter at Wrigley Field when my mind cleared and I felt better.

Unfortunately, that, too, came with a cruel twist of fate.

Because of the duties that awaited me at Tribune Tower for my normal Saturday shift, I could not stay for the game’s entirety. And because the desk was short-handed on Saturday, I had no choice but to leave the game early. It was one of the most agonizing positions I have been in.

I started making my way out around 4:15 when I tweeted this, but lollygagged to see if the Cubs could bloop one in front of an outfielder or if a seeing-eye single would make its way past the outstretched arm of an infielder.

I took the long way out. Grabbed a hot dog and a beer and watched on a TV near a concession stand.

I made my way out of the stadium after my meal, but not without second thoughts.

What if I texted a co-worker and said I would be running late because I was potentially watching history unfold? What if he was running late? Or even worse, couldn’t make it? Maybe I could stick around for another inning. Even two? I could justify taking a cab or an Uber downtown if it meant a shot at history, right?

Eventually, I walked out. The train ride was torturous, as I couldn’t stop myself from thinking about whether or not I was walking away from history.

As I tried to track what was going on at Wrigley, I tried to channel a co-worker with a reputation of jinxing no-hitters. That would totally do the trick. I’d be off the hook with a clean frame of mind.

I made it to work sometime around the seventh inning, but it was apparent as I walked into the newsroom that my plan hadn’t worked and the Cubs hadn’t gotten a hit. And as fate would have it, they wouldn’t get one either.

Maybe I should’ve known something was in the air. I really started feeling funny as I walked to the Addison Red Line station and overheard a scalper negotiating with a potential customer for a seat down the third base line that was being sold for $72.

“That’s the price for potential history,” I muttered under my breath in jest as I continued to second-guess my decision to leave.

I shared my story with co-workers and via social media and spent much of my down time agonizing over the decision and if others would make the same call if they were in my shoes, more so than the game itself.