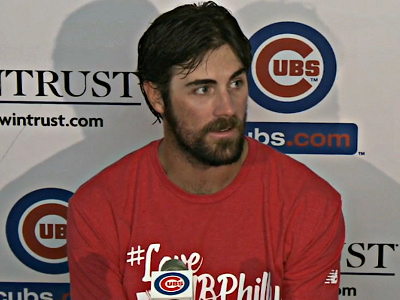 The Cubs are still mentioned frequently as in the picture on a prospective Cole Hamels trade with the Phillies, though they are typically omitted from the list of front-runners, which now reads as a two-deep, featuring the Rangers and Dodgers (with the Giants getting recent buzz, despite a lack of high-end prospects to deal). Given recent rumors, it’s possible that the Cubs prefer Padres righty Tyson Ross at this point anyway.

We’ll see if the Cubs remain involved on Hamels now that the Phillies’ process appears to be moving to the final stages. According to Jayson Stark’s sources, the Phillies have solicited “best” offers from the interested teams by tomorrow. The expectation is now that Hamels will be dealt, though a decision could go right up to the Trade Deadline on Friday.

Other interested teams in addition to the four mentioned above, according to Stark – and other rumors popping up – are the Astros, Red Sox, and Diamondbacks.

The guess here is that the Cubs are still involved, but only insofar as they’ve set a level (in prospects and in salary taken on) at which they’re willing to make a deal, and the Phillies have indicated that deal is unlikely to happen given other teams’ interest. But the Cubs will hang around until a deal is done, and see what happens. Maybe the market collapses and the Phillies get desperate. Might as well wait and see (unless a can’t miss deal for another pitcher comes up in the interim). Again: that’s just an educated guess based on the Cubs’ positioning, and the recent rumors.