You Did It! 3 Wishes to Make-A-Wish, 38 Hours of Non-Stop Blogging, & a Very Special Rally Bucket Skip to content 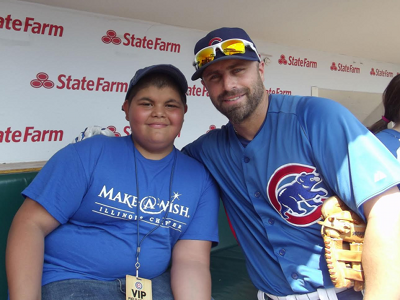 I am so blown away. So humbled. So proud. So happy.

Thanks to your extreme generosity, we’ve raised enough money for Make-A-Wish that, not only can they grant three full wishes to children and their families, but I now have to be a man of my word: I will blog for 38 hours straight later this week – no breaks, no sleep, just constant writing/Tweeting/Facebooking/Live-Streaming/etc. – and I’ll do it all … with a bucket on my head.

Not just any bucket, mind you. I promised to wear a bubble gum bucket, not unlike the ones we’ve seen Cubs players sporting so many times this season in close and late situations.

It turns out, the bucket I’ll be wearing is extremely not unlike the ones we’ve seen Cubs players sporting this year … because it’s an actual bucket from the Cubs’ dugout. A member of the Cubs’ organization saw the $18,000 challenge and reached out to donate a real-life “rally bucket” to the cause if we could get to our goal. We did, and the bucket arrived today:

By far the most common suggestion for what I should do during #BNBlogathon? Wear a rally bucket hat. Details soon. pic.twitter.com/sMCgf3KE9q

Now, of course, I’m not saying that the bucket sitting with me here at my desk is actually the one Starlin Castro is wearing in that picture or has actually graced the dome of any Cubs players this year as they pulled for a victory. I can, however, tell you that it is one of the Cubs’ gum buckets, and it has scuff marks and dirt on it. So I’m pretty much going to assume that this was the most important Rally Bucket in the dugout, was employed in all key comebacks to date, but then wore out its magic this weekend during the ugly Phillies series, and thus was safely able to be passed on to me for the Blogathon.

It shall now help me … eh hem … “rally” … through the #BNBlogathon.

Of course, if you actually want to see it on my head – for 38 hours straight – you’ll have to tune in to the #BNBlogathon, which kicks off bright and early at 5am CT this Thursday, July 30, and doesn’t stop until 7pm CT on Friday, July 31. That takes us through the Trade Deadline, the immediate aftermath, and right up until the Cubs’ game against the Brewers that night.

So far, we’ve raised over $19,000 for Make-A-Wish, and that’s before The Wife chips in the $500 she agreed to match yesterday in honor of her friend (whose story she shared here).

We’ve blown away the goal, but there’s nothing stopping us from giving more. You can donate to Make-A-Wish here, and I’ll see you on Thursday.

Well, I mean, I’ll see you pretty much constantly until then, too. But you know what I meant.