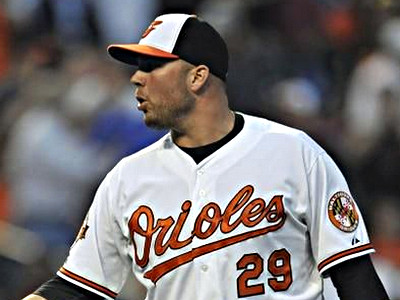 Per that rumor earlier today, the Cubs were always close on a deal for Orioles righty Tommy Hunter, but, since the deal came down to the deadline, it makes you wonder if the Cubs were keeping their options open … just in case.

There was no “in case,” though, and the deal is for Hunter:

.@Britt_Ghiroli confirms #Cubs to get RHP Tommy Hunter for OF Junior Lake

Here’s what I wrote about Hunter earlier:

As for Hunter, the 29-year-old righty would be a pure rental – he’s a free agent after this year – and it sounds like the Cubs would be picking up the rest of what he’s owed this season ($1.5 million) and sending a prospect. That’s pretty specific, and makes you think this is down the road a bit. Hunter has been particularly good for the Orioles the last three years, and currently sports a 3.63 ERA/3.32 FIP/3.93 xFIP this year. A warning, though: he’s a high-contact, low-walk guy. He gets a lot of groundballs, at least. He’d be the kind of addition I’d have been looking for the Cubs to make in the bullpen (though maybe I’d prefer a high strikeout guy (who wouldn’t?)).

Hunter is a nice rental for the bullpen, which currently goes eight deep already. Presumably one of Ben Rowen or Yoervis Medina will be optioned back to Iowa to make room when Hunter is available.

As for what the Cubs gave up: they gave up a dream. That’s what Junior Lake has always been – a dream that someday the on-field performance would match the freakish athleticism, and the raw speed and power. With the Cubs, Lake never got there, even as he turned 25 earlier this year.

That is not at all to say his time is up, and, given the rawness of his youth, and the strides he’s made at AAA this year, he’s got a strong case for being a late bloomer. Even then, I’m not sure he ever becomes a regular in the big leagues – the offensive profile doesn’t quite fit in a corner outfield spot (even if you’re optimistic about the bat), and his glove isn’t going to be strong enough to make him a plus defender in a corner (I don’t think). So, his upside is probably as a really nice bench piece. Definitely value there, but not necessarily something to bemoan losing.

There’s another consideration: Lake is out of minor league options after this season. So, if the Cubs had kept him, he would have taken up a spot on the 40-man roster all offseason, and then, if he didn’t make the 25-man big league roster out of Spring Training next year, the Cubs would have to waive him, and risk losing him for nothing.

So, whatever your feelings about the talent swap here on paper, the deal makes a ton of sense. The Orioles must have felt – with the flexibility of the DH, perhaps – that Lake has a real shot of being a bench guy for them at least by next year, or maybe even this year. That had more value than a low-level prospect, I guess.