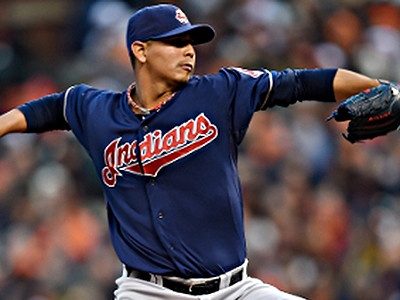 That all came out so quickly (in addition to the initial Carlos Carrasco stuff) that there’s not a great way to do this outside of one big post here, with Tweets and then my comments to follow …

teheran does not seem to be out there on trade market, despite rumors #braves

This seems to be in response, at least in part, to the early-morning rumor about the Cubs talking to the Braves about Julio Teheran. You’ll note that there’s not really a conflict there – the Braves may want it known that they’re not putting Teheran “out there on the trade market,” but that doesn’t mean there aren’t conversations being had with specific teams.

The #Redsox also like Tyson Ross a lot, says source. They've been operating "very quietly'' in trade talks for pitching.

Sources: #RedSox talking to Padres, as @jerrycrasnick said. Ross one target; BOS has prospects to expand deal and perhaps include Kimbrel.

Since the Red Sox are out of it this year, Ross still makes slightly more sense (and thus, a higher price) for the Cubs than the Red Sox, but I can understand why they’d be considering all controllable starters, just as the Cubs are. Speaking of which …

#Redsox are in market for controllable starting pitching. Heard they've talked to #Indians about Carlos Carrasco.

As I said earlier, there’s no reason to think tons of teams wouldn’t want a breakout starter with tons of cheap team control on his deal. The Indians must really want some upside bats.

to #Yankees, who would take on whole salary if could limit prospect return. Sticking point A-ball SS Jorge Mateo. Will NYY move him or not

Even if the Padres get Mateo, by the way, I highly doubt it reduces their interest in more big league ready shortstop types. I wonder if, at some point, a team could agree to take on Upton for a marginal prospect inclusion in order to get an offer for a pitcher over the top. That would have sounded crazy a month ago, but Upton has fallen quite a bit.

astros more interested in pen since getting mike fiers. talking to pads about kimbrel/benoit. also talking to other teams.

Good. Leave fewer suitors out there for the starters available. It’ll be interesting to see what happens with Kimbrel, as it sounds like it could come down to the Yankees (and money) or the Astros (and prospects).

The #Padres say there's no urgency to trade James Shields, believing he would clear waivers after Aug. 1, and could be dealt anytime

This is, of course, correct and also an admission of just how bad the contract was that they signed Shields to. Sort of a strange thing to be pushing out to the media, no? “This contract is so bad for this player that you can get him in August if you want!”

rays also considering trading young starters. so karns, others could be in play. not sure hat chances are.

Discussed Karns a little yesterday. He’s intriguing. I don’t have a great sense of what he would cost.