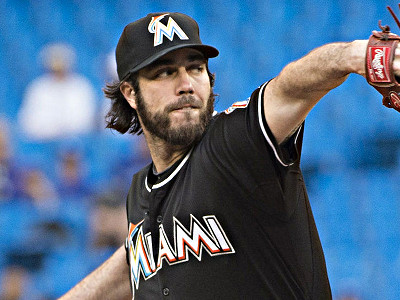 Source: Haren to Cubs from Marlins.

Once the dust clears, I’ll dig into Dan Haren as the Cubs’ new fifth starter – if that’s indeed what he becomes – and it’s a fine rental move. Non-sexy, but a necessary upgrade. We’ll see if this gets finalized (recall, the Cubs agreed to acquire Haren once before many years ago and it fell through).

As for the implications, well, we’ll see. This could be the only starting pitcher the Cubs acquire. That doesn’t take them out of the bench bat market or bullpen market, of course. We don’t know what the rumored three-team deal was about, so it’s possible that still goes through.

We’ll just have to see. Two and a half hours left before the deadline.

UPDATE 2: The Marlins are getting a couple prospects, and, while I would not expect them to be significant, they might not be total nothing players depending on whether cash is coming with Haren:

Haren traded to #Cubs and #Marlins getting 2 minor leaguers

UPDATE 3: A little quick and dirty on Haren – turning 35 in September, Haren doesn’t throw as hard as he did his in prime (indeed, he’s now down in the 85-87mph range after being mostly upper-80s the last two years), but he doesn’t walk anyone (scant 4.8% this year). He doesn’t strike many out anymore, either (16.8%), and his groundball rate has plummeted this season (just 31.5%). There’s not a lot here to love, but, then again, there rarely is when you’re talking about a depth, 5th starter upgrade. Haren is a veteran, which does mean something on a young team. This is clearly an upgrade for the Cubs at the back-end. Maybe not as much as we’d hoped, but it may have been the most rational move.

UPDATE 4: One bummer – when every start counts – Haren won’t be available to pitch again until Tuesday, having just pitched yesterday. That means the Cubs will still need to give Sunday’s start to a fill-in.

UPDATE 5: The Cubs are sending AA infielder Elliott Soto and righty Ivan Pineyro (Clark Spencer). The former is a great glove man, but he’s 25 with very little offensive upside – conceivable future glove-first utility guy, but that’s about it. Pineyro recovered from a forearm injury last year and was actually pitching well at AA this year, but, as I’ve mentioned before: he’s a Rule 5 eligible guy. The Cubs won’t be able to roster them all, so this is what happens. I’ll be interested to see the financial implications of the deal. Although Haren is owed about $3 million more the rest of this year, that was previously being covered by the Dodgers when they traded Haren to the Marlins. Do the Marlins just pocket that cash now and the Cubs pay Haren? Or are the Cubs getting Haren for “free”? My guess, based on the prospects, is that the Cubs are paying some.