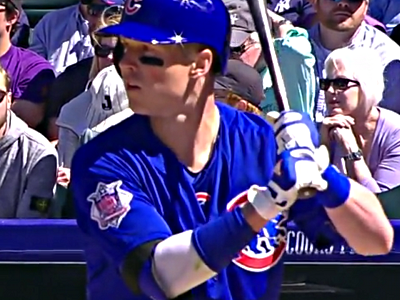 The ties between the Cubs, manager Joe Maddon and super-utility man Ben Zobrist have been unavoidable.

There was even a point when some believed the team had a Zobrist-type player in-house. Whether it was Arismendy Alcantara (here, here, here) or even a raw, toolsy type player such as Junior Lake as early as 2013.

As is often the case when searching for something perceived to be difficult to find, the Cubs’ Zobrist might turn out to be Chris Coghlan.

Coghlan is a jack-of-some trades in the field, having spent most of his time in left field (3,567 innings), while dabbling a bit in center (809.1 innings) and right (66 innings) over the years. But that simply scratches the surface of Coghlan’s versatility, as he logged 94.2 defensive innings in the infield prior to Friday’s start. More on that in a moment.

But first, we should note that much of Coghlan’s value in the field is tied to what he can do at the plate. Further, Zobrist provides the gold standard in offensive production from utility men with his .268/.351/.464/.815 slash line, .350 wOBA and 127 wRC+.

By comparison, here are the 2015 league averages via Fangraphs for positions Coghlan could find himself playing in a Zobrist-like role:

Further, Coghlan draws his fair share of walks, evidenced by an 11.1 BB% which is identical to that of Anthony Rizzo and representative of a team content with drawing walks — evidenced by the offense’s 9.0 BB% that is the third highest in all of baseball.

But unlike several of his teammates, Coghlan doesn’t strike out a lot (16.9 K%) and that makes him a stabilizing force in a line-up that often finds itself going through growing pains when it comes to handling the bat.

The difficult part regarding Coghlan is finding steady at bats in a league that doesn’t have the a designated hitter role for most of the year.

However, it has only been two seasons since Coghlan started multiple games in the infield, as Coghlan started eight games at third base — logging 67.1 defensive innings — for the 2013 Marlins. And yet, Maddon was confident enough to stick Coghlan in a spot vacated by Addison Russell, who has turned in a Gold Glove caliber season at second.

It is evident that Coghlan can hold his own offensively no matter where Maddon puts him. And in that light, he resembles what could be considered by some as a poor man’s Zobrist. But considering Coghlan did not come with the hefty price tag of prospects, it is a trade-off the Cubs are probably OK living with.