The Defensive Changes, and Addison Russell Showing Off the Glove at Shortstop (VIDEOS) Skip to content 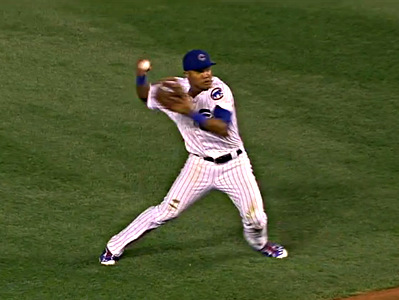 Although the primary discussion surrounding yesterday’s news that Starlin Castro would no longer be an everyday starter at shortstop was about the way it keeps a couple important bats in the lineup (Kyle Schwarber and Chris Coghlan), there’s secondary discussion to be had: the defensive impact.

It’s probably a safe bet that Kyle Schwarber, when he plays left field, will be a downgrade from Chris Coghlan out there, though maybe not significantly so (and he looked adequate yesterday). And, in turn, Coghlan at second base, when he plays there, will be a big downgrade from Addison Russell. After all, the latter had been emerging as a legitimate Gold Glove candidate at second base.

Of course, Russell’s glove doesn’t go away entirely. Instead, Russell will shift to his natural position, shortstop, where he can continue making incredible plays, perhaps just more of them. He’s probably a slight upgrade there from Starlin Castro, though we may need a little more time to know for sure.

The net to the Cubs is probably an overall downgrade in defense, albeit a slight one, when the alignment is as described above. I would think, though, the bat upgrade – essentially from Castro to Schwarber – makes up for it.

Speaking of Russell at short, he made a couple great plays at second base to help out his pitcher. First, he took a throw from David Ross on a stolen base attempt that almost no one would be able to convert into an out, and applied a crazy tag to get the runner. That’s the full video, but here’s a quick view:

But Russell wasn’t done. He also helped Jon Lester out on a 1-6-3 double play where the throw from Lester – as it is wont to be -was a little off target:

It was ballsy to even try for the quick catch and throw to first on that one, but Russell’s athleticism allowed him to do it.

I look forward to seeing more of Russell at shortstop going forward, and to see how he works with Chris Coghlan up the middle if it plays out that way. I could also see Tommy La Stella and Javier Baez seeing time there eventually.