Jorge Soler Nearly Crushes Taylor Jungmann with a Liner, Has Been on Fire (VIDEO) Skip to content 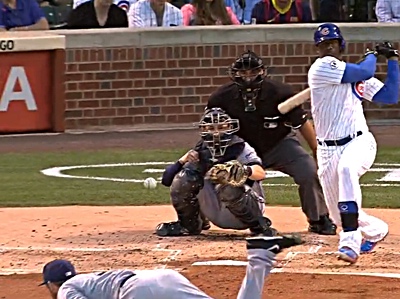 In last night’s game, Jorge Soler did what Jorge Soler does, and hit a ball just about as hard as humanly possible. You can watch the rocket single to center here.

And here’s the marvelous looping version:

I say “marvelous” not because Soler almost hit Jungmann, but instead because he didn’t hit Jungmann. It was just a fluke of where the ball was located combined with Junmann’s natural motion. Baseball is a game of inches, and so, too, is a player’s health sometimes.

Unfortunately the tracking data for the game either was not functioning or is not yet available, because exit velocity on the shot is not out right now. Good bet it was “fast” to “crazy fast.”

Soler currently has an average exit velocity (among balled balls that were tracked) of 92.96 mph, which is the 17th highest mark in baseball, per the data at Baseball Savant. (Kyle Schwarber, you’ll note, comes in at number four. Lulz.)

The laser single was just one of many lately for Soler, who still isn’t elevating the ball much, but has been on fire for his last 16 games, notching hits in all but two of them (and one of those was a game in which no Cub got a hit). His line over those 16 games is a solid .345/.406/.379 (125 wRC+) with a 7.8% BB rate and 25.0% K rate. The lack of power remains perplexing, but he hasn’t been striking out nearly as much, and is ripping the ball with regularity.

And one last reminder if just how close Jungmann’s day came to being a whole lot worse:

Here's how close Jungmann came to serious damage on that Soler rocket. pic.twitter.com/TmLOwioZDO