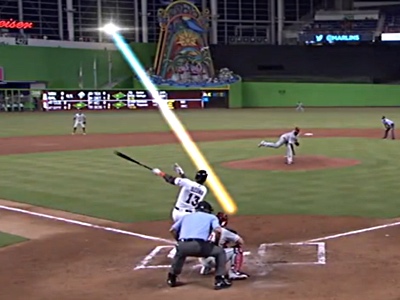 The Chicago Cubs had a couple nice homers yesterday – Addison Russell to left for 376 feet, and Anthony Rizzo somehow managing to yank this one 406 feet and keep it fair down the right field line – but, to be perfectly fair, neither was as crazy as the ones Michael Taylor and Marcel Ozuna hit.

Statcast was there to track both of them, and the videos are must-watch stuff.

First, here’s Taylor’s blast in Colorado, which, at 492.8 feet, is the longest ever tracked by Statcast:

It’s a good strong swing on a crushable pitch, and Taylor does have a fair bit of power. But still, it’s kind of crazy how far that particular ball went. Home Run Tracker had it at a more modest 474 feet, just the sixth longest in baseball this year, behind a Joc Pederson shot, an Alex Rodriguez shot, and, of course, three Giancarlo Stanton explosions.

If the 492.8 is correct, though, Taylor’s may have been the longest homer of the year.

And still, I find this Marcell Ozuna homer even crazier … because it landed ON TOP of the foul pole:

Obviously the odds of that happening even if you get the ball high enough and in the vicinity of the pole are astronomically small. Naturally, Ozuna’s homer – 118.4 feet according to Statcast – was the highest of the night, and was also a monster bomb, going 434.5 feet. All in all, that’s one of my favorite homers this year.

For the record, Rizzo’s homer last night was the second hardest-hit (behind Taylor’s) at 110.9 mph.