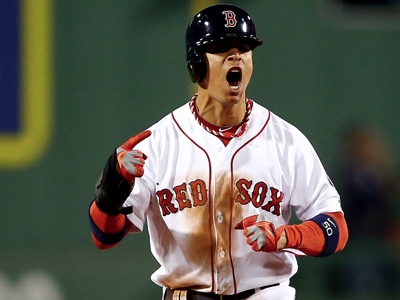 When discussing September and – Lord willing – the playoffs, Chicago Cubs manager Joe Maddon tends not to get into specifics on the players who could be added to the roster. He does, however, mention some general things, one of which is wanting to add some speed.

And, when you think about “speed” in September, you pretty much think about a guy who is flat-out a great baserunner, if nothing else. With rosters expanding to include anyone on the 40-man roster that you’d like to have available that day, teams have the luxury of dedicating a spot to a pure speed guy that they might not otherwise be able to utilize.

It’s possible that guy could be someone who is already around like Matt Szczur, though he’s going to be up with the big team anyway, providing outfield defensive support and speed off the bench. Is he the guy you’d call upon when you desperately need a stolen base and everyone knows you’re going to try and steal? I’m not sure about that.

So, perhaps with these things in mind, the Cubs have signed 30-year-old outfielder Quintin Berry to a minor league deal and assigned him, for now, to the Iowa Cubs.

Berry, who had been playing at AAA for the Red Sox until he was released last week, appeared a little bit in the big leagues in each of the 2012, 2013, and 2014 seasons for the Tigers, Red Sox, and Orioles, respectively. In those 341 plate appearances, the lefty actually put up a solid .266/.337/.369 line, though it’s been much more up and down in the minors in recent years.

One thing that hasn’t been up and down, though, is that Berry is an extremely good baserunner. Everything you find on Berry is laced with adjectives like “speed” and “fast” and “excellent baserunner.” The guy is so fast that he bunted for a double in 2012 (incidentally, off of the very pitcher Kris Bryant walked off on today).

In his big league career, he’s stolen 25 bases and been thrown out exactly zero times. In his minor league career, he’s at 351 steals and 84 caught stealing, which is already great, but it’s gotten even better in recent years. Since 2010, he’s stolen 178 bases and been caught just 34 times. This year, he was at 35/6. The guy has become not only an exceptionally prolific base stealer, but he’s exceptionally efficient at it.

I should point out that, in the last two years, Matt Szczur is at 50 steals and just 12 caught stealing, so he’s not too shabby in that department himself.

We’ll see if Berry winds up added to the 40-man roster before September rolls around, and, if he is, the Cubs will likely have an incredible weapon on the bench for the final month of the year.