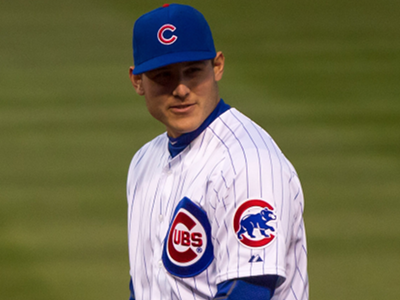 I’m not sure Anthony Rizzo will top his crazy catch any time soon, but he made a fantastic play in yesterday’s game that has been largely overshadowed by Jon Lester’s great outing and Kris Bryant’s walk-off.

In the third inning, with a runner on first base and one out, Indians pitcher Corey Kluber was called upon to lay down a sac bunt. His attempt resulted in a spinning pop up that was assuredly going to be caught by first baseman Anthony Rizzo or spin quickly into foul territory.

But Rizzo thought, “Nah, I can get two outs out of this bad boy,” and did this:

Did you catch just how impressive that was?

Watch this replay on loop:

Rizzo appears to have intentionally decided not to catch the ball, having seen that Kluber was not running. Then, knowing that the spin on the ball would quickly take it foul, he slid so that his body could block the ball and keep it fair.

He grabbed it quickly, fired a strong throw, and the rest was an inning-ending double play. That’s a really freaking awesome play.

Oh, and Rizzo’s triple plated the Cubs’ first run of the game, too.