Joe Maddon is a Super Cool Dude; Or, Why He's Such a Good Manager Skip to content 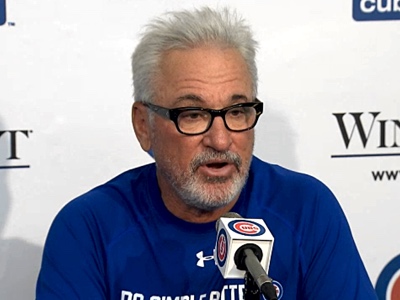 With the Cubs playoff odds near the highest they’ve been all season – and in over six years, really – I find myself overjoyed with the production and success of so many players on the roster. Rookies are contributing, veterans are staying consistent, and some other guys are having career-best years.

A portion of that success may be based on luck, while another portion may be due to diligent hard work and practice. All of it is likely due to some combination of the two. Although those are the most frequently cited reasons for this team’s success, there is at least some – probably very real – credit due to new Cubs manager Joe Maddon.

Widely respected throughout the league, Maddon was sold to Cubs fans as one of the best managers in baseball when he signed with the team back in November. While no one was (or is) exactly sure how much actual, tangible value a manager could add in a given season, it was clear that that, however the metric is calculated, Maddon is very likely near the top.

Nine months later, the Cubs have the fourth best record in baseball, are squaring up against their main competitor for the second Wild Card in San Francisco, and seem primed to take a hold of their first playoff birth since 2008.

This matchup, though, is interesting for more than the just obvious playoff considerations. Across the diamond from Joe Maddon sits another good manager, Bruce Bochy, who has led his team to 3 World Series victories in the past 5 years. Although he has a pretty different managing style, it would be hard to argue that he is not at least as good of a leader as Maddon.

Over at FanGraphs, Eno Sarris thought so, too, and decided to ask around each team to get a better sense of what makes Bruce Bochy and Joe Maddon so great.

(Although Bochy is a great manager, and the quotes and responses on his style in the article are very interesting, I’ll focus on Joe Maddon the rest of the way. This is a Cubs blog, afterall. I do advise giving the article a look, though, because it’s a pretty educational and fun read on both guys.)

With responses and quotes from Dexter Fowler, Kris Bryant, Henry Blanco, Dan Haren and Patrick Mooney, Sarris cast a wide net in his search for what makes Maddon so great. Although their individual answers vary to a degree, the one thing that shines through is all of the non-game stuff.

According to the collection of folks asked, Joe Maddon is an always fun, sometimes crazy, often laid-back, personable manager. He allows players to have their space, take time off and operate in a relaxed environment. And despite the laid-back approach, he expects a great deal out of every one of his guys. The way Kris Bryant puts it, “[he] brings out the best in you. You’re not scared to make a mistake or do something wrong, you’re not walking on eggshells,” is especially telling.

As one example, although it may seem unorthodox to miss batting practice to some, to me, it makes perfect sense. These guys are allowed to work hard when they need to and relax when they don’t. They know what is expected of them, but don’t burn themselves out trying to get there. In some ways, Maddon is like the cool teacher in school that lets you do what you want, while somehow getting you to do what you need without even realizing it. You like working hard for this guy, because you respect him. In a weird way, his trust in your abilities makes you push yourself even harder. In this sense, it’s clear why he would be the right manager for this specific team.

Although his personality may be the biggest factor, it’s something we’ve generally known about Maddon from other reports and stories. What was most interesting to me were some more specifics on his in-game management.

Dan Haren, despite only being around for a few weeks, has taken a special note about Maddon’s managerial style: “He’s a little bit of an older guy, but he’s really embraced some of the new school stuff, the analytics.” While that doesn’t necessarily surprise me, it’s comforting to hear from the players, themselves – especially the veterans. There’s no perfect way to manage a game, but the truth is, you probably need some combination of old school and new school to truly be effective. Maddon seems to be a guy that can lean on his experience when he needs to and dig into the numbers when he’s unsure.

The article has plenty more on Maddon, including some funny comments on his impossible-to-read lineup card, as well as a bunch on Bruce Bochy. With the matchup concluding today, I encourage you to take a look at what people think of these two managers and see if you can see those qualities applied in the series.

There are a number of good managers out there, but the Cubs seem pretty fortunate to have Joe Maddon.