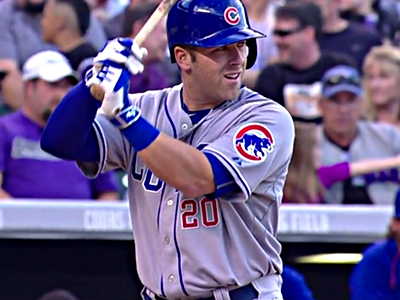 In tandem with officially announcing the Austin Jackson trade, the Chicago Cubs designated infielder Mike Olt for assignment. Given that Olt was never given a shot to come up and contribute off of the Cubs’ bench when needs arose throughout the year, perhaps this should be unsurprising.

As a guy with huge power and still some potential, Olt’s probably going to get a shot on some club out there, perhaps even on the 40-man roster. The Cubs will have 10 days to trade, waive, or release Olt. It’s possible he’ll clear waivers and be outrighted to Iowa, but it seems like a number of rebuilding clubs would be willing to take a chance on him for free.

We’ll see how this goes, and I’ll offer additional thoughts on Olt’s time with the Cubs (theme: unfulfilled promise, not entirely his fault) when the DFA is resolved.

If the Cubs plan to add anyone else to the 40-man roster today – Quintin Berry? Emilio Bonifacio? – they’ll have to make additional 40-man moves.