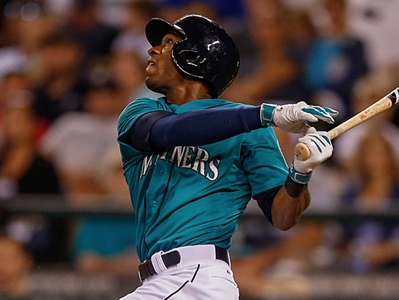 [UPDATE: It’s official and announced. Jackson and cash for a PTBNL and IFA bonus slot number 4 ($211,100). Mike Olt was designated for assignment to open a spot on the 40-man roster.]

Substantive analysis and update coming momentarily, but here’s the report that broke the news:

Austin Jackson traded to Cubs for player to be named and possible international slot.

Jackson, 28, was once a tip-top young outfielder with the Tigers, but the shine wore off considerably last year in an ugly .256/.308/.347 campaign split between the Tigers and Mariners (Jackson was part of the David Price trade at the deadline last year). Jackson is making $7.7 million this year and is a free agent after the season.

With Jorge Soler out with an oblique injury – perhaps for the year – and with Chris Denorfia hitting a skid recently, the Cubs could definitely stand to add a quality fourth outfielder, and Jackson’s about as good as it gets in that respect. He can rotate in (he’s a split-neutral righty), play late-inning defense off the bench, and provide speed on the base paths. And, heaven forbid, if there’s an injury to a starter, Jackson isn’t a huge step down.

The PTBNL is probably not too significant, given that the Cubs would be taking on $1 million+ of Jackson’s remaining salary (which must have been considered a lot, otherwise Jackson wouldn’t have made it to the Cubs on waivers and/or cleared waivers). Probably a prospect you’ll recognize, but not someone you’ll be heartbroken to see go.

Since the Cubs have already blown their international budget, by the way, they can send that IFA slot to the Mariners and simply pay more overage tax. Yes: in part, the Cubs are leveraging their financial resources to make this deal. That’s a great sign, my friends. [UPDATE: Per the deal announcement, the Cubs are also getting some cash back from the Mariners in the deal, so the financial oomph in this one might not actually be much when it’s all netted out.]

To add Jackson to the 40-man today (to make him playoff eligible, as we discussed earlier), the Cubs will have to remove someone else from the 40-man roster.

All in all: great move. I am quite pleased.