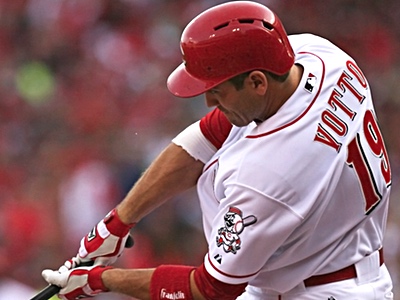 In the 9th inning yesterday, Joey Votto hit a three-run homer to seal a win for the Reds. It came with two outs and after Hector Rondon started Votto out with a 2-0 count.

Although you normally wouldn’t dream of intentionally walking a batter with runners on first and second, Votto is exceptional, and Cubs manager Joe Maddon did it once earlier in the series. Should he have done it again?

There are a number of ways to think about the decision – for Maddon, it was a pretty simple one, in which he liked the idea of his closer taking Votto out (ESPN). That’s really not all that irrational, as Rondon is very good, and, typically, don’t like to put more runners on base than necessary. Maddon was willing to go the intentional walk route earlier in the series with Kyle Hendricks on the mound (a move that didn’t work out – Phillips drove in two – and maybe Maddon felt a little burned), but Rondon handles lefties much better than Hendricks does. It doesn’t always have to be complicated.

But let’s consider the other side.

The key phrase in the preceding discussion, though, was “if everything else was equal” – we know that everything else is not equal, because that’s the entire point of the question here. Perhaps the risk of those increases was worth the reward of a better matchup at the plate.

Are the above changes in probability sufficiently offset by the change in batter from Joey Votto to Brandon Phillips to justify the walk? Well, I could try and crudely demonstrate it using their season numbers (which would itself become complicated because the pitcher they were facing, Hector Rondon, is quite good), but it’s not super easy to granulize in this way. I don’t even want to share the numbers I’ve been playing around with for fear of misleading you with bad math and statistics. Instead, I’ll simply note that Votto (who is super hot of late) has a 2015 season line of .316/.458/.578 against righties, with a .438 wOBA and 179 wRC+. Phillips has a 2015 season line of .285/.317/.390 against righties, with a .309 wOBA and a 92 wRC+. Votto is far more likely to do damage … but if Phillips came up (bases loaded), the situation was one that was far more likely to result in damage.

(If we imagine that only a base hit would hurt you, the drop from Votto at a 31.6% chance of getting a hit to the 28.5% chance of Phillips getting a hit is not even close to enough to justify an intentional walk. But, of course, as we saw, a “hit” is not the only concern, as Votto does much more damage with his hits than does Phillips. This becomes complicated.)

Suffice it to say: by the best I can come up with, the drop in expected production from Votto to Phillips appears to be close to offsetting the increase in run probabilities that would have attended the intentional walk. Close enough, that is, that I cannot confidently tell you there was a clearly right and a clearly wrong decision in that situation.

Once Rondon got to 2-0 on Votto, though, it sure feels like just putting him on and taking your chances with the much less worrisome Phillips would have been the right move. Perhaps that’s a little unfair, because what you actually would want is Rondon to give Votto nothing great to hit, even if not literally intentionally walking him. Rondon made a mistake with his third pitch, but that doesn’t necessarily mean the decision to continue pitching to Votto was a mistake.

Me? After 2-0, I would have said walk him. But, in the end, I know that it’s an extremely close call. It just didn’t work out this time.

The other part you have to keep in mind is that there is an art to managing; it’s not all just numbers on a sheet. Maddon knows his players. Maddon and his coaches are observing Reds players. Maddon is thinking about the long game. So much – even at an unconscious level – is informing every decision that, while I wouldn’t simply appeal to authority and tell you to blindly agree with everything Maddon does, I would say that you have to acknowledge there’s more going on in any given decision that you will be able to observe and deconstruct.