Somehow, Anthony Rizzo Caught This Ball Without Getting Trucked (VIDEO) Skip to content 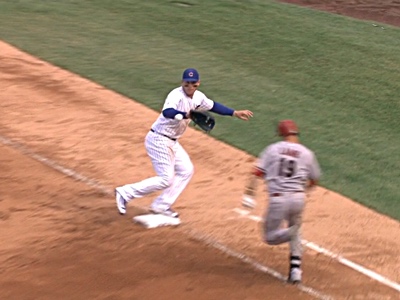 I’m not sure what “iest” superlative to give this play yesterday, but it was once again incredible:

The physical stuff involved in that play is probably all unconscious for him at this point, his body responding automatically to sensory inputs, deploying his natural athleticism.

But the concentration. To track that ball, coming across both the base and the runner, while also keeping a foot on the bag and avoiding a DOOM collision with the runner. Damn that’s impressive.

Seriously, this is what that play looked like at the last moment. Rizzo avoided getting trucked, caught the ball, and held the bag: We mere mortals would see that throw coming, and – assuming we could even summon the courage to try and catch a ball thrown firmly by Jake Arrieta – would immediately abandon all hopes of tracking the ball as it darted past the baseline. I probably would have added a little shriek and inexplicably ducked-and-covered for good measure. As long as the contents of my bladder remained unpiddled, though, I’d probably count it a win.

That is all to say: Rizzo’s good, man.