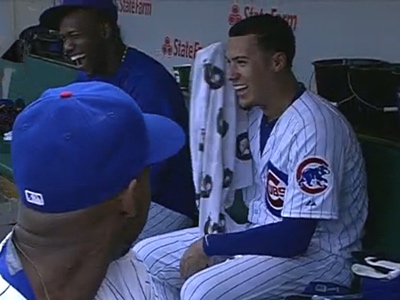 The curtain call is, more than anything, a feeling. Something big happens in the game – a critical homer, the culmination of a great day at the plate, etc. – and there’s a particular swell in the crowd. The fans aren’t just blowing up the moment … they’re calling for you. They want to see you again. They want to embrace you.

Perfect example today: Miguel Montero comes through with a critical grand slam. He circles the bases and enters the dugout. The crowd doesn’t stop, and, undoubtedly, those close to the Cubs’ bench are screaming for Miggy to come back out. He doesn’t have a hat, so he grabs Kyle Schwarber’s and shows for the crowd. It was perfect and fun.

Later that inning, Jonathan Herrera pinch hit and slapped a homer to the basket in right. It was a great moment for the season-long bench player – did you think he would last on the big league bench all year? good for him – and maybe the crowd should have coaxed him on for a curtain call.

And that didn’t stop Herrera from grabbing his moment in the sun:

Gotta love the encouragement he was getting from his teammates to go out there and get his due, and the crowd’s complete and total silence thereafter.

The bench was loving it, though:

And I was loving it, too. Good on you, Jonathan Herrera. You donned the Rally Bucket more than anyone else this year, and you deserved your moment.