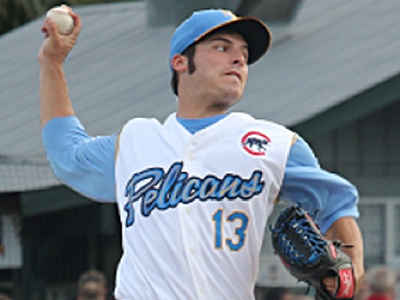 After formerly being recognized as the Cubs Minor League Pitcher of the Month for July, Myrtle Beach Pelicans pitcher Brad Markey comes in for another award for his outstanding week on the mound:

After throwing seven shutout innings against the Wilmington Blue Rocks – including just three hits, no walks and six strike outs – Markey became the third consecutive Pelican to win a weekly award. It was Markey’s first time taking home pitcher of the week honors. Today, he’ll pitch in the playoffs for the Pelicans.

During his time in the Carolina League, Markey tossed 55 innings with a solid 1.15 ERA (2.36 FIP) thanks to a good strikeout rate (20.5%) and a fantastic walk rate (3.1%). He held opponents to just a .185 average, although he did finish with the lowest BABIP (.230) and highest LOB% (85%) of any partial season in his career thus far. Both marks hint at some future regression, but his excellent control may carry him a bit longer.

Back on August 11, Luke updated the BN Top 40 Prospect list, and Markey made the cut. Coming in at 36 overall, Luke sees Markey as more of a middle inning reliever long-term, but liked what he saw from him in person. Keith Law had a chance to take in a Markey game in Myrtle Beach, as well, and agrees that Markey’s future likely lies in the pen, but believes his outstanding control and the potential of his curveball will allow him to continue starting for a while.

Markey isn’t a big-time prospect and may not be a potential “impact” guy, but he is a pitcher in the Cubs system that is having a very solid year. Quality pitching depth is always important, and it’s good to see the Cubs continue to acquire awards from all over their minor league system. You’ll likely see Markey move his way up to AA Tennessee next season.