Jorge Soler Could Be Back This Weekend - What Kind of Role Will He Play?
Search
Skip to content 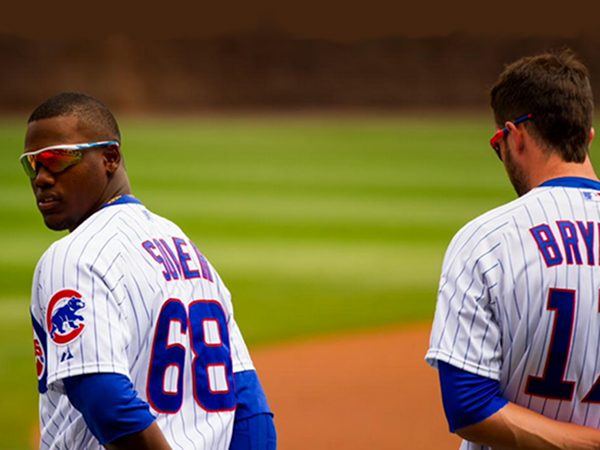 The plan for rehabbing outfielder Jorge Soler (oblique) was that he’d stay with the Myrtle Beach Pelicans through the conclusion of their season, and then likely return to the big league team. In terms of his readiness for big league action, you probably would have preferred that the Pelicans stretch out their championship series to the full five games so that Soler could see more game action.

But, of course, in terms of what you actually want to see, it’s great that the Pelicans stomped on those plans, and won the Carolina League Championship in a series sweep last night.

So, then, there are no more minor league games left in which Soler could play (instructional ball doesn’t start until September 21, and, even then, it’s not quite the same thing as minor league playoff games).

The plan is for Soler to return to the big league team this weekend for the series against the Cardinals, per CSN, though it’s no lock that you’ll immediately see Soler getting back into game action.

As we’ve discussed, the arrival of Austin Jackson, the permanent installation of Kyle Schwarber in left field (at least against righties), and the emergence of Javier Baez’s ability at third base have all conspired to dramatically reduce whatever playing time would have been available for Soler had he not been injured. What’s tricky is that Soler was playing very well last month before he was hurt, and, if he’s ready to go, he’s still an imposing presence in the lineup. To get him into the lineup, though, guys like Chris Coghlan, and/or Baez, and/or Schwarber, and/or Kris Bryant, and/or Jackson would have to be sitting (plus also guys like Starlin Castro and Tommy La Stella – it’s all interconnected).

That might happen from time to time, but it’s very hard to see Soler re-emerging as an everyday starter this season.

Still, it’s always good to have a player of Soler’s ability back in the fold, even if he’s primarily playing off the bench. Interestingly, Soler has an extreme reverse platoon split for his career (77 wRC+ against lefties, 111 wRC+ against righties), so maybe he’ll play the part of “lefty” bench bat the rest of the way, drawing an occasional start against a righty here and there (or maybe lefties, too, given that you’d expect a more traditional split, and the sample size so far is very small).

The upside in Soler’s bat remains right up there with any other young Cub (and holy crap is that a loaded group). It’s just that the circumstances of the roster and timing of his injury make it so he can’t be guaranteed a starting job at this time. Maybe he comes in crazy hot and grabs a spot by the end of the year. It’s not impossible. It’s just more likely that he’s a complementary player the rest of the way, and then everything is re-sorted and re-evaluated in the offseason heading into 2016.