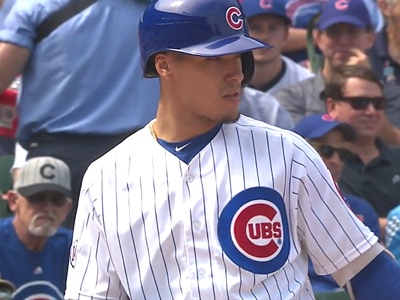 I’ll lead with the warning, because it’s as important as ever: coming into yesterday’s game, Javier Baez had the smallest of sample sizes thus far in 2015 (50 plate appearances) by which you can discern anything at all. Although it is a nice round number, 50 PAs is far from a large enough sample to truly identify any trends or lock into new adjustments. Indeed, there hasn’t been enough time for the league to adjust back to whatever changes he’s made and potentially throw most of his progress out the window. HOWEVER, in that limited exposure, we have seen some very interesting improvements to his approach at the plate and the numbers that support that observation.

But by “numbers,” I don’t mean his impressive slash line (.313/.353/.438) or even his highly-publicized strike out rate – which now sits at just 25.5%, down from 41.5% in 2014. Instead, the increasingly impressive improvements I’m alluding to have come by way of the much more predictive peripheral statistics. Specifically, in his short stint in MLB this year, Baez has improved his batted ball and his plate discipline data tremendously over his effort in 2014.

But it’s not just how the ball has come off his bat in 2015, it’s where they have been headed afterwards. In 2014, Baez pulled 48.3% of the balls he put in play, placing just 31.4% in center and 20.3% towards the opposite field. He wasn’t taking the pitch where it led him, and was instead electing to pull the ball as much as possible, which we know can be troublesome. In 2015, though, Baez has improved on each of those figures. His pull rate has decreased significantly (32.4%), while his percentages of balls hit towards center field (35.3%) and toward right field (32.4%) have increased. Again, those results aren’t as encouraging as the change in approach they necessarily imply. Baez is reacting to the pitches that are made, instead of having a predetermined swing locked and loaded. And the batted ball data party doesn’t end there.

To sum up his 2015 batted ball data – vis a vis 2014 – Javier Baez has been hitting more line drives, harder and in a more evenly-distributed fashion. Were these his only improvements, we’d all be happy and appropriately encouraged.

But it gets even better from there.

In 2014, Javier Baez had widely-recognized and actually-historic struggles with his discipline at the plate – underscored by 95 strikeouts in just 229 plate appearances. It appeared that he had serious trouble with pitch recognition AND making contact with almost anything – a pretty damning diagnosis. While many former MLB players’ have seen their careers ended due to either one of those problems, Baez’s 2015 adjustments may serve to remind us just how special he can be.

In 2014, Javier Baez swung at 41% of pitches out of the zone (O-swing%), while offering at just 58.7% of pitches in the zone (Z-swing%). These numbers alone indicate that Baez was often caught guessing at what the next pitch would be, rather than using his electric bat speed to wait back and determine whether he should swing or not. In 2015,  he has made an encouraging improvement. As of today, his O-swing% (39.0%) is two percentage points lower, and his Z-swing% (66.3%) is nearly eight percentage points higher. He is laying off more pitches out of the zone, and swinging at a heck of a lot more pitches in the zone. That is encouraging and will certainly lead to better results. But as we know, pitch recognition was only half of his plate discipline problems.

In 2014, Javier Baez had a significant hole in his swing. I can’t tell you exactly where or exactly why it was happening [Brett: high fastballs stick out in my memory], but he just wasn’t making nearly enough contact (59% contact rate). Not only was he offering at 58.7% of pitches out of the zone, he was making contact with those pitches only 42.1% of the time. He did make contact with 77.5% of pitches in the zone, but when you are offering at only 58.7% of them, that won’t result in enough (nominal) contact to make up for the other issues.

In 2015 (you guessed it), Baez improved on both of those figures. His O-contact% has increased by nine percentage points (51.2%) and his already alright Z-contact% increased to 78.9%.

With his overall contact rate increasing by nearly eight percentage points (66.7%), it’s clear that Baez has made a concentrated effort to shorten up and make more contact in certain situations – which squares with what our eyes and reports tell us. With the natural power he has in his bat, that is a more than acceptable trade off. Oh, and his SwStr% – swinging strike percentage – has dropped by two and half percentage points as well. Good work, Mr. Baez. Good work, indeed.

For any given player, improvements in all of these areas would be extremely important, and represent a monstrous set of adjustments, but for Baez, that all goes double. He does nearly everything else so well that his batted ball and plate discipline issues have felt like the only things (granted they are hugely important things) holding him back. If these early returns can be sustained, even if to a slightly lesser extent, we may be seeing an entirely different Javier Baez – one that will be very dangerous very soon.