Starlin Castro's Incredible Climb and Other Bullets Skip to content 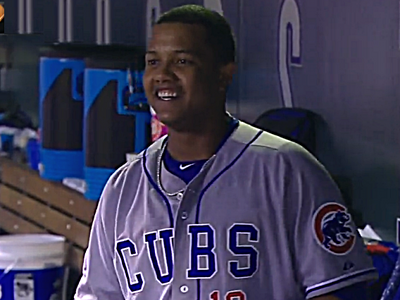 Part of the reason I wrote up the Maddon-Cardinals-retaliation stuff earlier this morning rather than last night is because I was driving to Chicago immediately after yesterday’s game concluded. It took me longer than usual to get in, as there was a massive storm blistering over northern Indiana just in time for me to see a terrifying lightning display – while driving at 30mph on the highway. At one point, a lightning bolt struck one of the large wind turbines on I-65 right next to me, and – this happened in a flash, so I could totally have misperceived – it looked like there was an eruption of sparks, bigger than I’d ever seen. The crack of thunder was deafening, the hairs on my arm stood up, and all that. My jaw literally hung down for the next several miles. It was an experience.