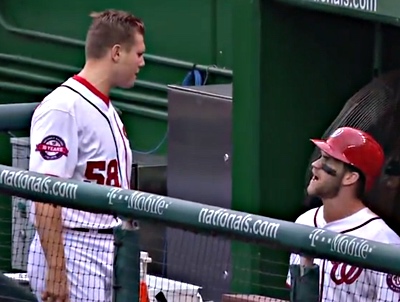 Hey, here’s something you won’t see happening in the Chicago Cubs’ dugout or clubhouse (um, this year, that is): a physical fight between teammates.

Tension has undoubtedly been building among several guys in Washington after the Nationals’ incredibly disappointing season – which effectively ended yesterday with a Mets clinch of the NL East – and, in particular, closer Jonathan Papelbon and star Bryce Harper have had some issues in recent days.

Today, it boiled over in the dugout, in full view of the world. Like, physically boiled over:

After the game, everyone involved dubbed the incident just one of those things that happens among guys on a team, which, I suppose, sometimes is true. It happened twice in the relatively recent Cubs past, though both incidents involved the same player.

As for the Nationals, they remain the perfect example of how a great team on paper – even after seemingly getting better in the offseason – can still be a massive disappointment. Never count those chickens or rest on those laurels.