Brandon Phillips Tries to Get Sneaky, Falls Down, Is Thrown Out Skip to content 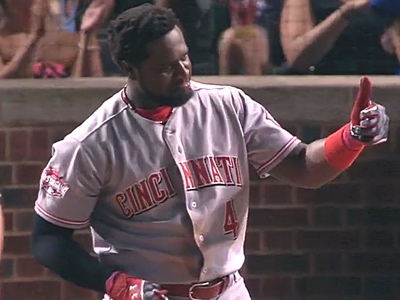 Brandon Phillips generates discussions. I’ll give him that. Sometimes good, sometimes not so good.

There was a hilarious moment in today’s game when, after a pop up to shallow left was corralled by Javier Baez, who was playing third base, Phillips decided to stray from third base just a bit. He appeared to be intending to toy with Baez and Addison Russell, who was also in the outfield, leaving no one at third base. What he didn’t seem to factor in was the ease with which Baez could toss the ball to the catcher if Phillips actually decided to go home, making his shuffle down the line totally unnecessary.

And then Phillips slipped, fell to his knee, and forced himself into a rundown in which he was thrown out.

It was quite funny, and, better yet, generated this from GIF-master Randall J. Sanders (with a hat tip to Jesse Jensen):

Gotta watch out for those track hazards, Brandon Phillips. They'll get you every time. @Cubs (concept: @jjrayn) pic.twitter.com/7MllVRYP2x