Your Holy Crap Catch of the Day: How Did Kevin Pillar Do This? (VIDEO) Skip to content 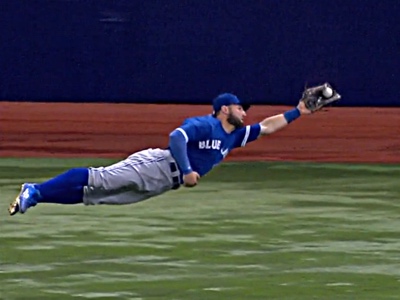 Those American League center fielders, eh? I sort of kid, but it seems like some guy in center field is busting out an absolutely absurd highlight reel catch over there every week. There was Kiermaier, then there was Trout, and now there’s Pillar:

He was flying there for a moment, wasn’t he? Like, actual, super-power flying? Just for a split second. Pretty sure he was: Put a cape on that guy, and he’s a super hero. He’s got so much loft there that it looks like he was photoshopped into the picture (which he was not).

The GIF really underscores just how aloft Pillar made himself in order to track and snag the ball: