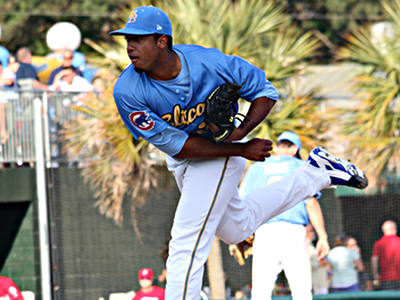 Over the past few weeks, Baseball America has been unveiling a top 20 prospect list for each of the many minor leagues. As it stood, ten Cubs had been identified as top 20 prospects in their respective leagues, recapped here: Arizona Rookie League, the Northwest League and the Midwest League. Today, the list grows by three, as a few members of the Myrtle Beach Pelicans have been named to the 2015 Carolina League Top 20 Prospects for Baseball America.

You can see the full list here at BA, together with a write-up on each prospect. The Cubs’ trio, perhaps unsurprisingly, is right-handed pitcher Duane Underwood, who comes in at number 7 overall, third baseman Jeimer Candelario, who is 13th, and former catcher-turned-outfielder Mark Zagunis, who lands at number 15 on the list.

Duane Underwood, 21, was the Cubs second round pick in 2012 and has some of the best stuff in the system. While he has run into some control and health issues in the past – his FIP jumped over 4.00 for the second straight season – his immense upside keeps him relevant. Indeed, Luke ranked Underwood just outside the top ten (11th overall) in the Bleacher Nation Top 40 this season.

Baseball America has a nice write up on him, but it is premium content so I’ll just give you the gist: Underwood has the potential to be a mid-rotation starter at best and a power reliever at the back end of the bullpen at worst. His mid to high 90s fastball and solid change-up will carry him to the major leagues. 2016 will be a big season for Underwood, as he looks to finally start moving through the system with a little bit more speed and consistency.

Jeimer Candelario, 21, was solid while with the Pelicans (.270/.318/.415), working for the second time at High-A, and earning himself a midseason promotion to AA, where his bat really took off (.291/.379/.462). The question heading into the offseason on Candelario is whether the Cubs will be forced to put him on the 40-man roster to protect him from the Rule 5 Draft, or whether they can roll the dice that no team will be able to bring up such a relatively young and still-somewhat raw talent to the big leagues just yet.

Mark Zagunis, 22, was the Cubs third round pick in the 2014 draft and has just completed a season that almost saw his walk rate (15.6%) match his strike out rate (16.8%). On the year, Zagunis slashed a strong .271/.406/.412 in over 500 PAs, placing himself firmly on our radar. I don’t want to nitpick, because that is an impressive line, but given his defensive limitations (so-so corner outfielder), you’d like to see that slugging percentage come up just a bit. Given his low strike out rate, he has room to add more power without sacrificing his overall value/approach too much.

Unlike Baseball America, Luke ranks Zagunis (9) two spots ahead of Underwood (11) in the Bleacher Nation Top 40 and thinks that his future could be at the top of a lineup. BA agrees that Zagunis could be a table-setter type in the future, but his lack of power will be an issue as a below average corner outfielder. Either way, the Cubs have shown an interest in players with Zagunis’ approach/makeup and I do believe he will play a role on the big league team sooner rather than later.

Candelario, who’s come in for a ton of love around here, comes in two spots ahead of Zagunis on the BN Top 40.

For the rest of the list and a write-up on each player, check out the Baseball America article, here. I know our attention is directed elsewhere, this week, but this stuff remains important. The players in the Cubs MiLB system are the reason the Cubs are where they are. Well, that and Jake Arrieta.