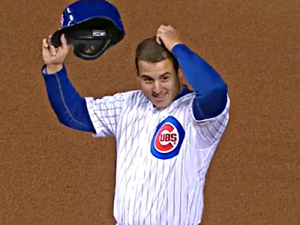 The 2008 Chicago Cubs team was incredible.

In short, the 2008 club was a behemoth that was dominated on the mound and at the plate. It was an enjoyable team, too, with a group of stars – Soriano, Lee, Ramirez, DeRosa, Edmonds, Zambrano, Dempster, Wood, Marmol – having great seasons. That season, incidentally, cemented my appreciation for advanced statistics, and pushed me to start BN.

It was a good year. A strong year.

But throughout the season, as the loaded Cubs rolled over opponent after opponent, I couldn’t shake it. You know what. That feeling. That nagging feeling. The fear that six months of domination could be over in just three short games.

It’s arrogant to say you knew what was coming in the 2008 playoffs, but that feeling was pervasive. The rise of 2003, paired with the almost unspeakably painful ending, the collapse of 2004, the ensuing din of frustration and failure in 2005 and 2006, and the rise again in 2007. And then for 2007 to end in an all too brief playoff sweep by the Diamondbacks?

That was it? That was the redemption for 2003? For what we’d paid into the cosmic store?

No matter how loaded the 2008 team, then, it was doomed to feel the weight of collective dread. The pressure that this is supposed to be the time they finally do it because look at how good they are. The regular season was not a victory march. It was a funeral procession. Every happy win was accompanied by a side of anticipated despondence.

So, when the 2008 Cubs’ hopes died on the bats of Manny Ramirez and James Loney and Rafael Furcal, that feeling was confirmed. We were imprinted.

Then the front office turned over. The Plan emerged. Excitement and expectations built.

The commonality, though, pretty much ends there.

The Cubs could lose tonight, and their season could end. Another calendar flip could go by without a Cubs playoff win. This is baseball, after all, and thoughtfully spun yarns have far less impact on the results on the field than the talent and bounces on it. And, of course, I have no doubt that the Pirates and Pirates fans have their own demons to exorcise.

Stories that won’t bother me today. Stories that the players on this Cubs team can’t be bothered to indulge.