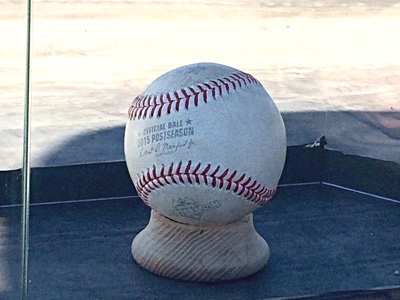 I absolutely love the combination of reverence and glee with which this is all being treated.

In the 7th inning of Tuesday’s NLDS-clinching Chicago Cubs win, Kyle Schwarber thoroughly pantsed a Kevin Siegrist pitch, and, although initial views made it look like the ball had cleared the right field video board, it actually wound up on top of the board.

The Cubs decided to leave the ball on top of the board after inspecting and confirming it, and you can see how they’re preserving it in this video:

It’s still not certain what will happen with the ball after the postseason, and, of course, if Schwarber wants to keep it, then it should be offered to him. If he doesn’t, however, it would be cool to see that thing living up there for as long as the right field video board remains in place.

And if you missed the homer, or just want to watch it again (and again and again):