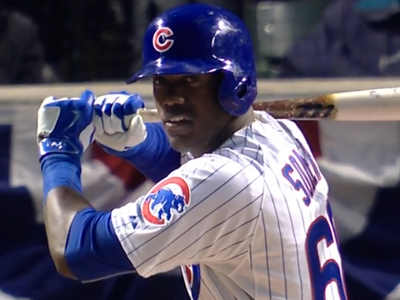 Only one player this postseason reached base at a 60 percent clip and slugged more than 700 points higher during their team’s playoff run than he did in the regular season.

That player was not Daniel Murphy.

In fact, if it wasn’t for Murphy’s postseason home run barrage, Jorge Soler might be the talk of the baseball world.

Soler hit for a .474 average and slugged 1.105 as six of his nine postseason hits (three doubles, three home runs) went for extra bases. Soler’s .600 on-base percentage was helped by six walks in 25 plate appearances, which resulted in a 24.0 percent walk rate.

Soler’s postseason was definitely one for the ages. After just one postseason run in which he appeared in seven games, he has more home runs (3) than Sammy Sosa (2), as many walks as Ryne Sandberg (6), and more RBIs (5) than Gabby Hartnett (3).

Remember when Soler couldn’t even make an out in the postseason?

FiveThirtyEight.com’s Rob Arthur recently wrote that a run like Daniel Murphy’s should happen once every two years. If that’s the case, what do we make of Soler’s postseason showing, which Arthur called “absurd”? Arthur notes the 982-point difference between Soler’s regular season OPS (.723) and what he did in the postseason.

While that is a ridiculous jump, it was only a year ago when Soler burst onto the scene with a .903 OPS in 97 plate appearances over the course of 24 games.

Do you remember what Soler did in his first seven games in The Show?

Well, except maybe this shot off Adam Wainwright: