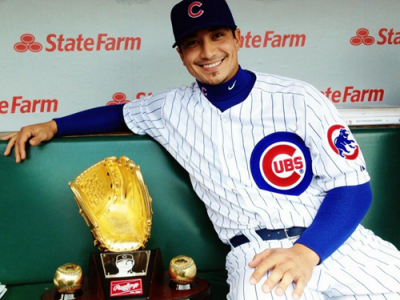 The Rawlings Gold Glove Award finalists have been announced, and there’s a possible surprise entrant for the Chicago Cubs:

Although not classically thought of as a top defender, Arrieta was very good this year, both by the eye and the advanced metrics (his 6 defensive runs saved was third highest in baseball, behind only Dallas Keuchel (13) and Zack Greinke (9)). We probably focus on his issues holding runners a bit too much, because, otherwise, when it comes to fielding his position, he’s very good.

That Anthony Rizzo is once again snubbed from even being a finalist is frustrating to me. Although he was fifth in UZR, Rizzo was tied with Adrian Gonzalez for second in all of baseball at 10 DRS. (It’s a bit academic, because the leader – Paul Goldschmidt – blew away the field and will run away with the actual award.)

From there, the only other Cub would would have merited serious consideration is Addison Russell, who was hurt here by virtue of a midseason position switch from second base to shortstop. I think he probably still should have gotten the nod somewhere, but we’ll just have to hope he’s properly recognized when The Fielding Bible releases its multi-position award.