The Fielding Bible Awards Are Out, and I'm a Little Disappointed for Addison Russell Skip to content 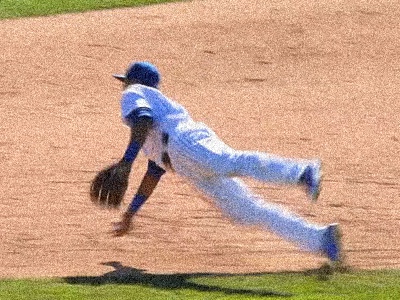 Jake Arrieta got a finalist nomination for the pitcher Gold Glove in the NL, so we still have a rooting interest for defensive recognition this year for the Cubs.

But the award I was really eyeing for the Cubs was the Multi-Position award given by The Fielding Bible, a less-well-known defensive honor, but one that more accurately reflects defensive success in a given season. Further, since the Gold Glove recognizes players at a single position, guys who have split time at multiple positions – arguably an even more impressive defensive feat – can get short-changed.

That is to say, the guy I was eyeing for the Cubs was Addison Russell, who was as impressive defensively this year as any Cubs player was offensively.

Unfortunately, Russell did not win the award, which instead went to Diamondbacks outfielder Ender Inciarte. I am bummed, but I am not angry, as Inciarte was freakishly good all over the outfield this year (29 defensive runs saved between the three outfield spots? Holy crap). Plus, the vote was apparently extremely close, with The Fielding Bible indicating that Inciarte received 94 points, and Russell received 90 – the closest vote of the year. I still would have gone with Russell, given the relative importance of his positions, but, then, maybe that’s just my bias creeping in. Saving a run in the outfield is just as valuable as saving a run in the infield.

Maybe next year he’ll get the nod at shortstop by both The Fielding Bible and the Gold Glove awards.