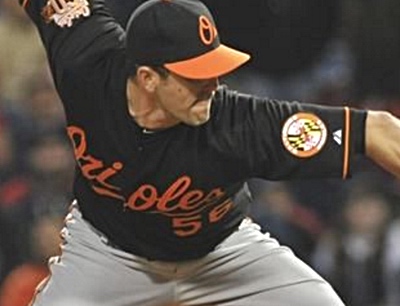 I wondered if we’d see this pop up this week, given the lack of quality depth in the reliever market, and the Cubs’ needs there.

For starters, I’ll caution you not to take TOO much from that, because not only is it merely an indication that those teams, including the Cubs, are interested in a top reliever (and there might be more teams). Without a qualifying offer attached, the interest in O’Day will go up even further.

But it does provide a vehicle to remind folks that the Cubs could definitely use at least one quality reliever added to the mix this offseason – all of Trevor Cahill, Fernando Rodney, and Jason Motte are free agents, to the extent anyone is counting on them (they could return, but nothing is certain, including their performance). And they don’t get much better than O’Day this offseason.

The 33-year-old sidearming righty has been fantastic for the Orioles for four straight years, consistently posting ERAs around two, as well as FIPs and xFIPs around 3.30 or better. His strikeout rate was always an excellent 25ish%, though he took it to another level this past season, shooting up to an incredible 31.9% (with a tiny 5.5% BB rate). Indeed, O’Day had a ridiculous walk year, which could mean he got a little better, or could mean he’s a candidate for regression. Of course, even if he regresses to the guy he was pre-2015, he’s still excellent.

Various projections have O’Day getting a deal in the three-year, $20 to $25 million range, which seems pretty light to me, especially when you consider the thin market. I suspect O’Day will get closer to $30 million when all is said and done, and I’ll concede that it’s debatable whether that’s the right move for the Cubs.

I will point out, however, that, as fickle as bullpens can be, elite relievers tend to continue to be elite relievers. If there’s one area where this front office has struck out a bit – lame pun intended – it’s with free agent reliever acquisitions. Kyuji Fujikawa, Jose Veras, Jason Motte, Phil Coke, etc. It seems they’ve tried to find a value arm each year, and each year they’ve been a little burned. Small sample, of course, and that’s not to say they haven’t had success overall in making the bullpen work (just look at how well they brought in pieces during the season last year). But, it kinda feels like it’s time to either go big, or just stop going medium.

And, as I say it, even I must concede … it’s such a small sample. Maybe it’s fine to keep going medium …

We’ll see if the Cubs’ interest in O’Day kicks up past this very initial stage.