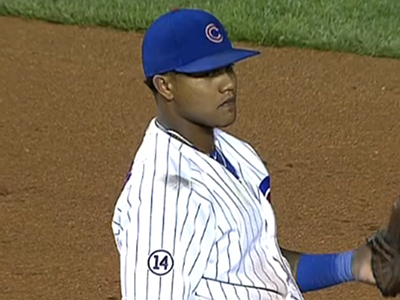 According to Mark Feinsand and the New York Daily News, the Chicago Cubs and New York Yankees have discussed a big-time swap involving infielder Starlin Castro and outfielder Brett Gardner. Details in the report are slim, outside of the mention of those two names and the possibility that Castro would play second for the Yankees, who are discussing Gardner with many teams.

We’ll see if this turns into something more than a single report mentioning that a trade has been discussed – that doesn’t necessarily mean a lot – but let’s discuss a hypothetical swap.

Castro, who moved to second base late in 2015 and broke out offensively, is a plausibly tradable piece given the Cubs’ other infield options and the $41ish million he’s owed over the next four seasons. He was always likely to pop up in trade rumors this offseason, so there’s no surprise here in that regard.

The question for the Cubs, of course, will be whether they’re ready to take away some depth in the infield, and whether they feel like they wouldn’t be selling low on Castro, who struggled for most of 2015 before showing the guy he can be later in the year. Castro isn’t even 26 yet.

As for Gardner, the 32-year-old outfielder is likely no longer a center fielder (though maybe he could handle it passably at Wrigley Field), and dealt with a wrist issue (which makes you nervous) for much of 2015. He hit .259/.343/.399 on the season, mostly on the strength of a dominant first half. With Aaron Hicks in the fold, the Yankees are shopping Gardner to try and supplement the roster elsewhere – on that level, a Gardner/Castro swap makes sense for them.

Does it make sense for the Cubs? Unless Gardner can play in center field, or unless the Cubs are dead set on moving Jorge Soler or Kyle Schwarber (or putting Schwarber primarily behind the plate), Gardner is a tough fit. And, given his age and the wrist issue, he’s no lock to continue being a plus offensive player. From July on last year, Gardner hit .216/.313/.305. In 2014, for what it’s worth, Gardner was at .256/.327/.422, his lowest OBP since his rookie year. If the power is at all impacted by the wrist issue, then his ability to get on base becomes all the more important.

Financially, the deal wouldn’t offer much savings for the Cubs – Gardner is owed $37.5 million over the next three years (plus a likely $2 million buyout on an option thereafter), so the total commitment is similar, and, annually, he’s paid more than Castro – and, frankly, I like Castro’s chances to be a better offensive player the next few years.

So, then, if these were the primary pieces in a swap, you’d have to think the Cubs would be getting more. Or maybe I’m still too optimistic on Castro (whom I could see as a three-win player at second base for the next several seasons), or too pessimistic on Gardner’s future/ability to handle center field. *If* Gardner could play passably in center, or perhaps be part of an overall outfield rotation, and *if* there was good reason to believe the wrist injury (1) hampered Gardner’s 2015 season, and (2) is totally in the past, then maybe I can see a one-for-one swap being fair.

UPDATE: What sounds like a denial out of New York (where the report originated, by the way):

there's been no talk of gardner for castro to this point. NYY seek pitching in deals. they dont mind ackley/refsnyder combo