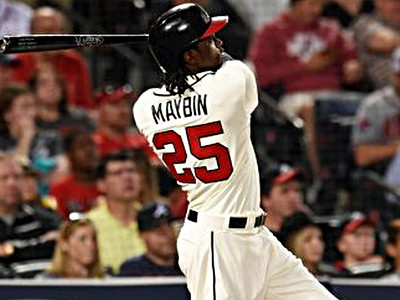 With apologies, given the flurry of more-directly-Cubs-related activity yesterday, I wasn’t able to share and comment upon a couple notable trades that went down around the league. There are definitely potential Cubs impacts here, though.

The Braves traded center fielder Cameron Maybin to the Tigers for a couple fringe lefties (and, of course, considerable contract savings). Maybin, who was solid in the first half for the Braves last year, fell off and finished as a meh regular in center field, so I won’t go as far as to suggest that he could have been a trade option for the Cubs to fill their starting void in center. Instead, the impact here to the Cubs is more generally that the Tigers were able to fill their need for an outfielder capable of playing in center field (whether starting, rotating, or in a platoon with Anthony Gose) without going after a guy who may have been of short-term interest to the Cubs. And, of course, it’s just the latest example of the Braves selling off aggressively. Yesterday we discussed the possibility of a trade match between the Cubs and Braves on some of their controlled pitching.

The Blue Jays picked up swing man Jesse Chavez from the A’s in exchange for breakout reliever Liam Hendriks (who, d’oh, was briefly a Cub a couple offseasons ago). Chavez, a year away from free agency, could pitch out of the pen for the Jays, or could slide into the rotation, where they still have clear needs, even after re-signing Marco Estrada. The impact here, then, is pretty clear: the Jays might get a little less aggressive in the starting pitching market now that they’ve got Chavez in the fold. To be sure, they’re going to still be looking to add. But this softens the need, and, although it’s not clear that the Cubs and Jays are directly competing for any starters at this point, they do have some youthful redundancies in the outfield that could be used to pick up pitching in trade – so it’s not hard to see the Cubs and Jays competing in trades at some point in the near future, to say nothing of the free agent market.