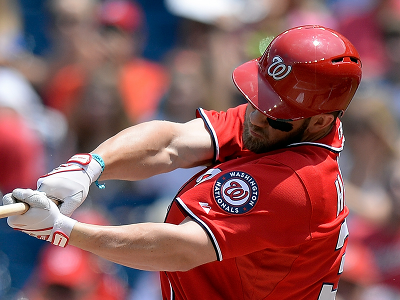 This post was largely prompted by a fun discussion in the Washington Post on what a Bryce Harper extension could look like. The 23-year-old MVP has three years of team control left (he’ll make $5 million in 2016, and then have two arbitration years), and the guesses from anonymous executives on a hypothetical extension ranged from six years and $180 million to 15 years and $450 million (with an opt-out built in, naturally). The latter estimate really isn’t all that crazy, and, indeed, could prove a bargain over the life of the deal – that’s how good and young Harper is, and how flush the industry is with revenues.

It all makes you wonder if and when the Cubs will start approaching their youngsters about extensions. There are complications with each of the team’s five young position players, though.

Having netted more than $6 million in the draft, Kris Bryant is probably not going to be a strong candidate for a team-friendly extension (and, from his perspective, given his extreme upside, it’s probably worth it for him to bet on himself for at least a couple years – to show what he can be – before even considering the possibility of an extension).

Addison Russell wasn’t quite as well-paid as Bryant, but he was a first rounder and he also does have Scott Boras as his agent.

Javy Baez might be a candidate, but he’s not yet established himself as a regular big leaguer, so the risk is much higher.

Jorge Soler is already on a unique contract that pays him more than pre-arbitration players typically make, and allows him thereafter to opt into arbitration once he qualifies (where he could, again, make a little more than he otherwise would have).

The range of Kyle Schwarber’s value is tied up so heavily in his future position that it seems too early for either side to realistically consider any kind of extension.

It seems unlikely that the Cubs wouldn’t be approaching the guys to gauge their interest over the next couple years, of course, but I’m not sure I can put a finger on exactly how it will play out. There’s still a lot of time, relatively speaking, as none of the above players will be arbitration eligible for a couple years at least, so that’s a good thing. And, let’s be honest: we don’t know which of these players is a long-term, core piece (well, some of them anyway), and which ones could be moved as soon as this offseason.

As I said, the Harper thing got me thinking, even if I didn’t land anywhere in particular, and I though the discussion was sufficiently interesting to toss out there and keep on folks’ radars.