Cubs and Braves Might Be Poor Fit on Shelby Miller - He's Awfully Intriguing, Though Skip to content 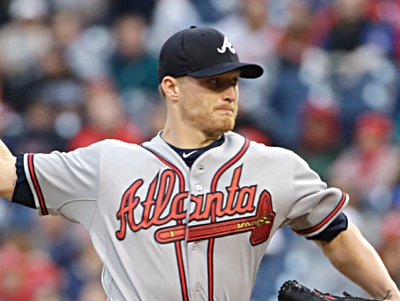 Having discussed one half of that equation already today (and it actually winds up relating directly to this pitching trade stuff), I wanted to share a little bit on Braves pitcher Shelby Miller, who is increasingly popular on the rumor circuit, even if the Braves’ asking price remains exceedingly high.

There’s a fantastic article by the inimitable Jeff Sullivan at FanGraphs on what changed for Miller in 2015, and, if you read it, I suspect you’re suddenly going to be (1) way more into the idea of the Cubs acquiring Miller, and (2) more understanding of the Braves’ lofty trade demands.

The short version is that Miller substantially diversified his pitch repertoire in 2015, going from basically a two-pitch pitcher to a four-pitch pitcher, which is an uncommon leap (but it can happen when a guy is 24/25 and always had the physical gifts). For years, folks feared that Miller couldn’t succeed long-term as a starter in the bigs relying primarily on just his fastball and curveball, no matter how good they are (that’s how most great relievers begin their careers in the big leagues: as two-pitch starting pitchers who carved up the minors and then couldn’t do the same in the majors).

But, in 2015, Miller not only varied his fastball usage between a four-seamer and a sinker, he added a cutter. Moreover, according to FanGraphs’ pitch value metrics referenced by Sullivan, that basically-brand-new cutter was the third best cutter in baseball, behind only Corey Kluber and a certain NL Cy Young winner you might know.

Against that backdrop, then, it’s not hard to see why a number of teams view Miller as a pitcher on the verge of a substantial breakout. Good velocity, emerging sinker that gets tons of groundballs, one of the best cutters in the game, a curveball that has the potential to be a wipeout pitch, great pedigree and physical gifts, mid-20s, and commanding four pitches successfully?

OK, I’ll just say it: that sounds a hell of a lot like Jake Arrieta a few years ago.

I want to be crystal clear here that I’m not comparing the two as pitchers (though there do seem to be some similarities), and I’m not saying Miller is on the verge of becoming one of the best few pitchers in baseball (Arrieta is a freak in a great way, and you’d have to be a crazy person to predict that kind of thing happening again). Instead, I’m using Arrieta as an example of the kind of pitcher teams are willing to bet on, and why Miller is going to be seen by many as that type of pitcher.

The funny thing? I wrote the preceding three paragraphs before reaching the end of Sullivan’s piece. Guess what he says, too? Yup. He discusses the same Miller/Arrieta comparison.

Circling back to the rumor world, I’ll say again, then, that it’s not surprising the Braves have a huge ask on Miller. Frankly, even if they’re rebuilding, I’m not sure I see entirely why they would move him at all right now. When you’re rebuilding, you want to bet on guys that can really, really break out. That’s Miller. Sure, they have a ton of upper-level pitching in the pipeline, but give Miller a chance to break out in a big way in 2016, and then deal him for even more at the deadline or after next season.

Maybe that’s what will happen:

It's looking more and more like #Braves will hang onto Shelby Miller. They've received a ton of hits, but are not shopping him.

#Cubs are interested in Miller. But #Braves have Hector Olivera in LF and Nick Markakis in RF, so Jorge Soler may not fit.

And obviously, #Cubs would rather part with Baez or Castro than Soler. It's not an ideal fit from either side.

I’d take issue with the “obviously” in that last one as it relates to Baez and Soler – I think they’re probably pretty darn close to each other in the Cubs’ desire to retain when you consider contracts, positional value and defense, etc. – but the point remains. The Braves want a big return for Miller, and maybe they really would view Soler, alone, as not enough.

If that’s the case, even given everything I wrote above about Miller, I could see the Cubs – or other teams in a similar position – balking at such lofty demands for three arbitration years of Miller. This might be one of those rumored trades to which both sides would say no.

For their part, if all of that is true, maybe the Braves would just be best off being the ones to bet on Miller breaking out.