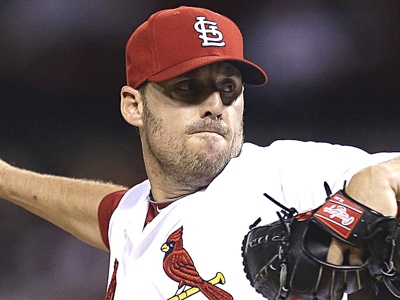 I notice it every year around this time: Yahoo’s Tim Brown is all over certain baseball rumors. Don’t get me wrong – he’s about baseball all year round, but this time of year, he just really seems to be nailing things. When he offers a rumor, I take special note.

The Cubs are pretty hot on Lackey at the moment. Talking two- and three-year possibilities.

In other words, the possibility of the Cubs signing John Lackey sooner rather than later is becoming very real. If I were guessing, the Cubs would sign him today if Lackey would take two years. His camp, however, is probably pushing for three. And that’s the dance right now, while the rest of the pitching market plays out. Again, that’s just an educated guess, but, given the rumors and what we know if the market, it seems fair.

Then again, if the Cubs could tack on that third year for slightly more money, reducing the AAV (think two years and $32 million, or three years and $38 million), maybe both sides would be into that.

Like I said earlier in the Samardzija/Lackey piece, I think getting Lackey on a two-year deal would be perfect for these Cubs. Although he’s 37, Lackey projects to be still very effective the next two years. He’s been healthy, his velocity has been steady, he’s become increasingly effective with his two-seamer, and his peripherals suggest that a 3.50 ERA-type performance over 200 innings is easily achievable.

On that last point, remember: there’s a big difference between a guy who can post a 3.50 ERA over 200 innings in a season and a guy who does it over 170 innings because he’s consistently leaving the game in the 5th or 6th inning. Remember not to just compare ERA/FIP/xFIP among starters. You also have to look at innings, because it’ll tell you a lot about how effective a guy is when batters are seeing him more than a couple times in a game. And those are the kinds of starters who can have a positive impact on the bullpen, in addition to whatever production they, themselves, provide.

Your one reasonable hang-up on Lackey at two years should be the draft pick it’ll cost, but, with a compensatory pick coming if Dexter Fowler signs elsewhere, and with the Cubs’ first round pick all the way down at 27, the “cost” of losing a draft pick this year is relatively low. On the right, short-term deal with Lackey, it’s worth it.

UPDATE: Dave Kaplan checked in on the rumors, and here’s what he got:

I just hung up with a long time source who believes that the Cubs will land Lackey. "He brings some real toughness to that team."

I care less about toughness than I do about pitching performance, but Lackey has pitched for some good teams, I suppose. In the end, much of this will come down to the deal for me. If, that is, it keeps going as it looks like it’s going.

UPDATE: They signed him.