In Honor of the John Lackey Signing: That Time Jon Lester Got a Hit Off of Him Skip to content 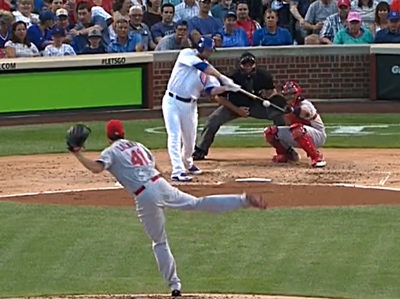 Jon Lester and John Lackey are friends. That was probably not an entirely insignificant fact when it came time for Lackey to sign with the Chicago Cubs, as he reportedly did yesterday, pending a physical. The two pitched together in Boston, and now they’ll be teammates again in Chicago.

Jon Lester joined the Cubs last year having never notched a hit in his career throughout various interleague appearances.

In July of this past season, Lester faced off against his friend, Lackey, at Wrigley Field. Lester was 0-71 at the plate in his career to that point.

But Lester ripped a shot up the middle, clipping Lackey in the process, and logged the first hit of his career:

The crowd got on its feet, giving Lester a standing ovation. It was all quite awesome, and also a little hilarious.

Lester would go on to notch his second and third career hits later in the year, both also against the Cardinals.