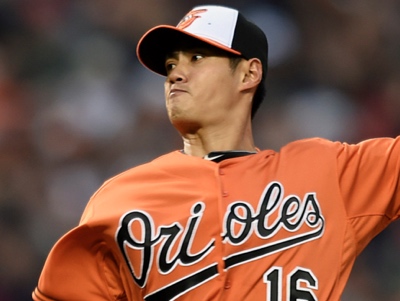 As we’ve said (again and again), the Chicago Cubs will be checking in on all starting pitchers this offseason, being that they have a need for them, and being that the market is lousy with them.

One arm that hasn’t popped up yet in rumors, however, is lefty Wei-Yin Chen, whom many had ticketed for a return to Baltimore or a deal with the Yankees.

Bruce Levine offers reason for Chen to be popping up now:

Chen was made, and declined, a qualifying offer from the Orioles, so he is attached to draft pick compensation. Now that the Cubs have already signed one qualified free agent (Lackey), dipping back into that pool is less of a concern (especially because they’ll get a compensatory pick if/when Dexter Fowler signs elsewhere).

Chen, at 30, and consistently very solid, looks like a good bet for just about any team, including the Cubs, if he comes at a reasonable rate. That’s one big question, though, as opinions on Chen’s price tag are wildly divergent. The FanGraphs crowd had Chen at four years and $52 million, whereas Jon Heyman and MLBTR were at five years and $80 million. To my mind, especially given the way the market is developing, Chen is a very good bet to get five years and close to that $80 million mark.

Does that make sense for the Cubs? Well, I could argue either way, depending on how many resources they actually have available. My preference, of course, would still be for them to trade for a pitcher and then use available dollars on an outfielder like Jason Heyward or Alex Gordon (or Denard Span or Dexter Fowler).

Further, on the pitching side, even if the Cubs are going to sign another starter, I’d kinda rather see them wait out the still-very-large Chen-Leake-Kazmir-Kennedy-etc. group of pitchers to see which might still be around in mid-January, looking to sign a deal. The Cubs might be able to get another short-term deal that way.

That is all to say: I like Chen for the Cubs … if he fell into that category. He’s good. He’s solid. Until today, I didn’t think that he was ever really going to come up in connection to the Cubs, so I hadn’t discussed him much. But that’s not because I didn’t always think he could be great in the Cubs’ rotation. It’s just that, at this stage in the offseason, post-Lackey and pre-trade, pre-outfield-addressing, I’m not eager to see the Cubs leap at Chen unless they’ve got more money to play with than they’re hinting, or unless he’s coming at a short-term bargain (which seems unlikely).