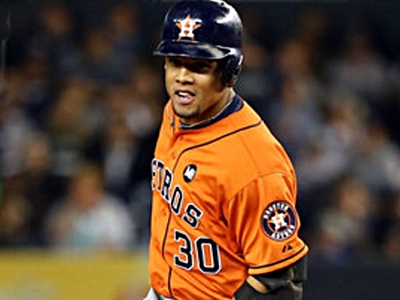 How about another center field option to add to the mix? Perhaps another one-year player acquired from the Astros?

A year after the Cubs filled their center field hole by trading for one year of Dexter Fowler, the team might go back to the well to try and get one year of Carlos Gomez.

The Houston Chronicle reports that the Cubs are interested in Gomez, whom the Astros acquired at the deadline this past season from the Milwaukee Brewers.

Gomez, who turned 30 a few days ago, will make $9 million in 2016, the final year of an extension signed with the Brewers, before hitting free agency. It was a down 2015 for Gomez, who hit just .255/.314/.409 between his stops in Milwaukee and Houston, and battled a hamstring injury throughout the year.

There are certainly a number of interesting options for the Cubs in free agency, but Gomez has significant upside, as well as a mere one-year commitment. That’s got to be awfully attractive to the team.

Of course, that means his price tag would likely be significant, even accounting for just one year of control and the down 2015 season. It’s not clear from the Chronicle article just what the Astros would be seeking in a deal for Gomez, though they’re known to be looking at adding an impact reliever to their bullpen, and probably would also like to add a young starting pitcher. I’m not sure that the Cubs are the best fits in those regards, but if they’re interested in adding to their prospect stores, then presumably a match can be made with the Cubs. Keep in mind in any prospect cost: like with Fowler, there’s a good chance a qualifying offer could be made to Gomez after the season, possibly yielding a draft pick, and slightly lessening the blow of losing a couple very good prospects.

That Fowler deal last year went down in mid-January, after much of the free agent market had thinned. It’s possible we’d see that kind of approach again this year, with teams revisiting possible fill-in trades like this once avenues in free agency are exhausted.

Then again, given the craziness that always comes this time of year, I wouldn’t rule anything out in December.