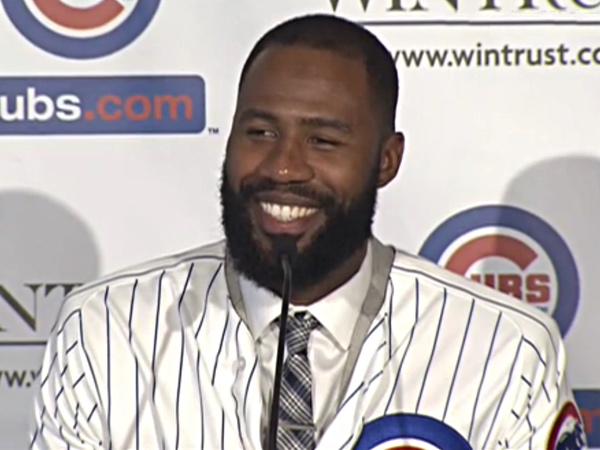 Yesterday, the Chicago Cubs introduced new outfielder Jason Heyward, whose eight-year, $184 million contract is the richest in team history, even if it probably won’t wind up playing out that way.

That is to say, we finally got the long-awaited particulars for Heyward’s contract, and, as utterly incredible as the baseline number looks – eight years and a $23 million AAV for a top 26-year-old free agent in this market is just killer – the full story is a little less sexy for the Cubs, which was entirely expected.

Heyward gets a $20 million signing bonus, which is deferred (i.e., it won’t be paid right away, which is a benefit to the Cubs). That deferral, plus the structure of the contract, makes the total actual value of the deal in present dollars closer to $180 million – which is to say, the deferral and the structure save the Cubs about $4 million. That bonus deferral will end, however, if and when Heyward opts out of his contract.

Heyward also gets a full no-trade clause in the first three years of his deal, and a limited no-trade clause in years four and five. Thereafter, he’ll be qualified for 10/5 no-trade rights (all veterans with ten years big league service time and five consecutive years with their current team have no-trade rights by rule of the CBA – you no longer have to have it in your contract at that point).

As has been widely discussed, Heyward has two opt-outs in his contract, one after the third year, and another after the fourth year. That second one kicks in only if he reaches 550 plate appearances in 2019, however.

Think about that for a moment with me. Heyward may opt out that second time only if he didn’t opt out the first time, and only if he was very healthy in that 2019 season. Does that strike you as odd? Heyward’s camp wouldn’t want to have any limitations at all on the second opt-out, which suggests the plate appearance limitation on the second opt-out was something the Cubs wanted in there. Your first instinct is probably, “Well, yeah, they want to limit the chance he opts out.” Except think about how the limitation would actually kick in: Heyward loses the right to opt out if he wasn’t healthy in 2019. Why would the Cubs intentionally want to force Heyward to stay on for the latter four years of the deal if he was injured? Indeed, if Heyward were injured in 2019 but still wanted to opt out, it seems like the Cubs would want him to be able to opt out.

Best educated guess I can take on trying to reconcile this stuff? Either the Cubs actually wanted to incentivize Heyward to opt out after three years, or the Heyward camp was so insistent on a second opt out (perhaps because of the hugely ridiculous post-2018 free agent class) that the Cubs would allow it, but only if it was limited in some way (even if that way proves to be a little awkward). Perhaps the limitation is designed to help the Cubs in negotiating a new agreement with Heyward if and when the sides are discussing an alternative extension in advance of the first opt-out? I’ve had only a little time to digest this, and, without an actual inside view to the negotiations, this is all conjecture.

Suffice it to say: the contract is complicated and clever, and appears to include strong incentives for Heyward to opt out after year three of the deal. If he’s reasonably healthy and effective in the coming years, and unless there’s a sea change in the financial picture of MLB, you can expect that he’ll opt out after the 2018 season.

If that happens, there will be some disappointment, because the full eight-year, $184 million deal will probably be looking like a bargain – but, then, that’s why the opt-outs were included in the first place. They are what got Heyward to sign on the dotted line on a deal that is otherwise so dang attractive for the Cubs. He gets the security of $184 million if things go awry, and the Cubs will probably get three years of prime Heyward for $78 million. Sure, they assume the downside risk of a serious injury or ineffectiveness, but in exchange, it’s like they just signed a premier, prime-age free agent to a three-year deal at a $26 million AAV. Imagine that had actually been the deal; that’s an absurdly good signing. If Heyward went into the market affirmatively seeking a three-year contract, he probably gets upwards of $90 million or more.

No, I haven’t changed my mind about opt-outs. They’re still designed to be player-friendly, and, indeed, I hope you can see here in this very post why that’s the case – Heyward has locked in an absolute minimum of $184 million for himself, but has also retained the ability to score much, much more (and take away that valuable contract asset from the Cubs in the process). The opt out, as a contract provision, is of no value to the team. It is of enormous value to the player.

But, these days, you don’t get a 26-year-old premier free agent without one. Or two. Even if that second one is a bit of an oddity, it’s still a benefit to Heyward. Perhaps he and his agents decide they’d like to avoid that 2018 class, and will plan to roll the dice on opting out after 2019. Perhaps he’ll so love his time with the Cubs that he won’t even want to opt out no matter what. It’ll be his option.

In the end, though, you don’t have to look too far around the league at the kinds of contracts being thrown around to know that this was a good deal for both sides. Sure, Heyward gets attractive opt-out provisions that he’s likely to utilize to get a whole lot more money, but the Cubs were able to sign the top positional free agent in a loaded class (he’s 26 years old, for crying out loud!) for a guarantee $20 to $30 million less than various pitchers have gotten.

Through some creativity, it looks like two sides were able to come together on a deal that should make each very happy.

As for the player and the team? Well, we already know each is very happy about now being associated with the other.