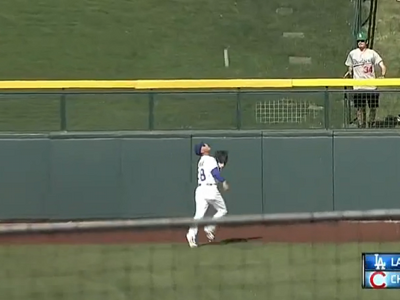 Whether you think he is the superstar center fielder of the future or a completely washed up bust (or, more likely, something in-between), Albert Almora is the next man up in this winter’s Prospects Progress. Checking in at number five on the latest edition of the Bleacher Nation Top 40, Almora is easily one of the most controversial prospects to come through the Cubs’ system in quite some time.

Almora struggled in the first half of the season in 2015, badly, in fact, for a prospect of his caliber, finishing the front stretch with a line of just .244/.285/.340. Then he went to Canada as a starting outfielder for Team USA in the Pan Am Games. And during that mid-season intermission, something clicked.

Add it all up and he finished with season totals of .272/.327/.400 with a 7.1% walk rate (career high), a 10.4% strikeout rate (his lowest in full season ball) and 8 stolen bases (career high). The walk rate is quite good for a 21-year-old in Double A, and the strikeout rate is nothing short of excellent. Unfortunately, all of that is overshadowed by that vast disparity between the first and the second half production.

Fortunately, we don’t have to decide which half is the half we should pay the most attention to on our own. A guy who knows quite a lot about Cubs’ prospects in general and Almora in particular, Jed Hoyer himself, is here to help with that.

The way he has played in the second half, he really has come a long way,” Hoyer said. “Sometimes you forget he’s 21. You have to pay more attention to second half stats. This guy had his struggles but he was able to come out of it. That’s very important.

So let’s take a closer look at his second half. His strikeout rate was fairly consistent between the two halves, and, while the walk rate ticked up a little, I don’t think we have enough suggest a significant change in approach at the plate. He may have been a little more patient in terms of waiting for pitches he could drive, but probably not enough to account for that enormous jump in stats.

A jump in Batting Average on Balls In Play would be consistent with the increase in production, and a jump in BABIP in isolation could indicate a streak of bad luck in the first half that turned into good luck in the second half. But I don’t think we can automatically assume blind luck. Not until we’ve examined the other options, anyway.

There is also a marked increase in Isolated Power (SLG – AVG), one that is very interesting. His first half ISO of .096 was unimpressive, but his second half figure of .163 is actually quite strong. Given that both halves of the season have more plate appearances than we need to consider each sample statistically significant alone, I don’t think we can just write off that jump in ISO as some sort of statistical fluke. In other words, Almora was hitting the ball a lot harder in the second half than he was in the first half.

Let’s take a look at some tape.

This video is of Almora in spring training in 2015. If you’ve watched much of Almora in any previous season, this is the swing you are used to seeing. It is a balanced, controlled swing that keeps his left (front for him) toe more or less planted on the ground throughout the swing.

Video number two, taken in late May, shows essentially the same swing from the other side. We see the same balance, the same bat control, and the same tendency to keep the front toe on the ground.

I am not a scout or a batting coach, nor would I claim any unusual expertise in the physics of hitting, but I strongly suspect that this version of Almora’s swing was selling out power in exchange for contact. It is more of a slap-hitter swing, not one likely to produce line drives. It the swing of a guy we would expect to hit for an anemic ISO and lower BABIP thanks to a higher percentage of more weakly hit balls.

Now take a look at this video, taken in mid-August. In particular, watch the front foot.

I checked a few game videos (thanks to MiLB.tv) from Almora’s second half, and they show the same thing. The grounded-toe is gone and he has replaced it with a slight and controlled leg lift. You can visibly see in the video the difference this makes in terms of weight transference. That should translate into more power behind the swing and into harder hit balls. Harder hit balls would result in an increase in both BABIP and ISO, just like we see in the numbers.

I also think I am seeing somewhat of a downhill plane to his swing in the first two videos as opposed to a slight uphill plane in the second video, although I’m not confident in that observation without some higher speed video to compare. If the swing plane did change, it should result in a few more line drives and somewhat fewer ground balls, something that would also be consistent with his statistical transformation. [Brett: This is all vaguely reminiscent of Addison Russell’s swing changes midseason this year at the big league level. I’m thinking there’s something here.]

I am not a scout, a batting coach, or a swing expert. The above few paragraphs could be entirely wrong in every aspect. But, at least for now, the video evidence strongly suggests to me that Almora’s second half surge correlates with (and is very likely the result of) a very fundamental change in his swing mechanics that was designed to generate more power. That means the second half numbers are likely sustainable. And that is a very big deal.

Almora’s glove is awesome, exciting, and ready to patrol center field in Wrigley Field today. His defense, for me anyway, is absolutely not in question. I love what I see every time I see it and I cannot wait to see more of it. The only question is his bat. It is his work at the plate that will determine whether he is a defensive-specialist-style fifth outfielder or a league-average starting center fielder. First half Almora was a future fifth outfielder. Second half Almora is a future league average (or maybe a little better) starting center fielder. And, based on the swing changes and resulting surge in production, I think second half Almora is probably the real thing.

Almora struggled in 2015, but he made some significant adjustments mid-season and finished on an impressive hot streak. He’ll head to Iowa in the spring looking to prove that his new swing can produce in Triple A as well as it did in Double A, and if he handles that challenge, I think a major league call up awaits him as soon as the Cubs find room to play him (mid to late season, most likely). I do not see Almora has having quite the star potential of Kris Bryant or Kyle Schwarber or Addison Russell, but I do think he could be a key piece of a very good team for a number of years.