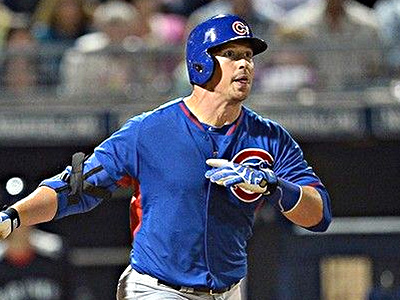 When I talk about your affection for a baseball team having to mean something more than the jerseys a collection of otherwise anonymous and interchangeable players wear, I mean a variety of things – a connection to the history of the team, the memories you hold, the experiences you share with other fans, a love for a city and a ballpark – but one of the most important things is an actual affection for the players in those jerseys.

No, you don’t have to love every player who dons a Cubs uniform, and, yes, a guy’s performance on the field is a huge part of what we like or don’t like. But I think it enhances the fandom greatly when you get a window into the person, and you like what you see.

John Baker wasn’t an offensive powerhouse in his time with the Cubs, hitting just .192/.273/.231 in 2014. Defensively, he was pretty OK, according to both the eye test and the metrics. As a receiver, he was solid. All in all, he was what you would probably describe as an “acceptable” back-up catcher. He wasn’t asked to be more, and he did his job.

But fans loved him quite a bit more than his performance might otherwise justify. Why? Because he genuinely seemed like a cool dude who was enjoying every minute of his time on a Cubs team that wasn’t going to win any titles.

In 2014, this happened. Wrigley Dugout never sounded so good. pic.twitter.com/laKz9iQuyF

Very happy to be rejoining the @Cubs family in the Baseball Operations department. #flythew #wearegood pic.twitter.com/pjMaXjKqYy

And now, as his tweet indicates, John Baker is back with the Cubs’ organization as a operations assistant in the baseball operations department. Woo hoo!

According to the team, Baker “will contribute to all elements within the club’s baseball operations department, including player development and scouting with an eye towards catching and mental skills. He will visit the club’s affiliates to work with the minor league players on and off the field, evaluate amateur players leading up to the draft, and spend time around the major league club among additional responsibilities and opportunities.”

In sum, I read that as basically the Cubs will be taking advantage of Baker’s knowledge and skills to improve the organization and its players in a variety of ways.

Baker is a smart baseball dude, who showed it off throughout 2015 with Periscopes that broke down all kinds of baseball dynamics that you might not notice just watching the game yourself. He even did some excellent work for Fox Sports, and talked to Michael about the nature of retaliation and protecting teammates in baseball here at BN.

Welcome back to the Cubs organization, John Baker. Cubs fans feel like you never left.