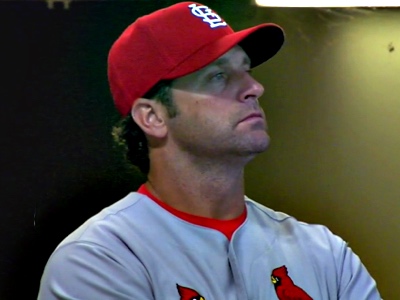 Ever since Jason Heyward offered some very candid thoughts on why he chose the Chicago Cubs in free agency over the St. Louis Cardinals, I’ve been waiting for a response out of St. Louis. I wasn’t sure we’d actually get one, because it’s always touchy when talking about a former player who opted to depart for another club – if you say almost anything, you’ll be dubbed salty or whiny or something worse.

Thankfully, Cardinals manager Mike Matheny obliged in this St. Louis Post-Dispatch article, taking on Heyward’s commentary on the aging core in St. Louis (in short, Heyward saw himself fitting better long-term with the younger Cubs core). To his credit, I think Matheny was pretty reasonable in his response.

“I don’t think we have anything to apologize for in having a group like a [Matt] Holliday, a [Yadier] Molina, a[n Adam] Wainwright. Those are the kinds of guys everybody wants on a club,” Matheny told the Post-Dispatch. “I see where [Heyward’s] coming from. I mean, look at what Chicago’s done. It’s very unique in this game — to have that many impact players at that young age. And he’s a young player. But I can’t say I’m in any kind of agreement with that [Chicago] core being better than any kind of core that we have.”

There are many more thoughts from Matheny on the issue in the Post-Dispatch article, as well as a deep take on the Cardinals’ odd offseason, and it’s worth a read.

Matheny shifted the discussion rather deftly there, making it about the quality of the core, rather than the youthfulness, though in doing so, I’m not so sure he didn’t highlight the very issue the Cardinals will face in the coming years.

When you think of the Cardinals’ “core”, of whom do you think? Probably those three named players, each of whom is over 30 and dealt with serious injury issues in 2015. Matt Carpenter, too, I’d think, though even he just turned 30.

The Cardinals have many other quality players, but Lance Lynn just had Tommy John surgery, Jhonny Peralta is 33 and was one of the worst hitters in baseball in the second half last year, Matt Adams was hurt last year, and the bullpen is good, but it’s a bullpen.

On the young side, the Cardinals absolutely have some nice pieces – Kolten Wong, Stephen Piscotty, Tommy Pham, Randal Grichuk, Carlos Martinez, and Michael Wacha are all guys any team would like to have – but all come with questions.

If you were comparing the young side of the Cardinals’ “core” – if you’d even include all of those guys – I think it’s pretty easy to see that the Cubs are very far ahead, especially now that Heyward, himself, can be included in their core.

For the long term, I’m not sure the Cardinals are in that much better shape on the pitching side than the Cubs, but I think that’s where you’d make the case if you wanted to argue that Heyward is wrong about what he sees in the future for each club.

In the end, though, I don’t think you can get too excited about an imminent decline of the Cardinals. Yes, much of their most core-iest core players are aging, injured, and/or in decline. But the Cardinals develop young players extraordinarily well, and they also have a ton of financial resources available at their disposal, both because of continued revenue increases and also because that aging core will roll off the books soon.