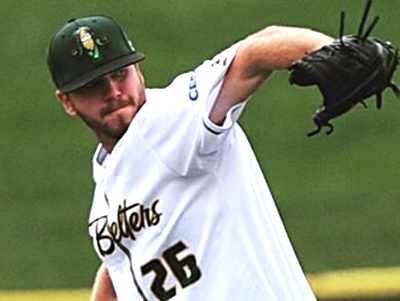 According to the Normal CornBelters of the Frontier League (i.e., Independent Baseball), the Chicago Cubs have acquired right-handed pitcher Cole Brocker for cash.

Brocker, 25, was originally drafted by the Detroit Tigers in the 39th round of the 2011 Draft, but elected to stay in college (Oregon State University), until he eventually made his debut with the CornBelters on May 17, 2014. Not two full months later, the Atlanta Braves purchased his contract and sent Brocker to rookie ball.

Brocker played out the remainder of the 2014 season in rookie ball, before hitting three stops in 2015 (A, A+ and AA). Unfortunately, things didn’t work out and the Braves released him on June 27, 2015. At that point, Brocker signed back on with the CornBelters until the Cubs came around and scooped him back up.

There is no indication of how much it cost to acquire Brocker, but I wouldn’t expect it to be a significant price.

Brocker is a big reliever, standing at 6’4″ 220 lbs and has had limited success over the years in the minors. Over 19.1 innings in rookie ball (in 2014), Brocker kept a 3.26 ERA, while collecting 21 strikeouts. Although you might feel that ERA is relatively mediocre for a 24-year-old reliever in rookie ball, his FIP (2.42) shows much of his promise. With just a 55.0% strand rate, it wasn’t hard to see why the Braves still saw potential (sequencing had not been on his side).

Still, despite the solid peripherals, I can’t help but feel something about his performance must be a bit off. Obviously, the Braves are capable of understanding and utilizing information like strikeout rates, walk rates and FIPs, so why give up so quickly after just 14 innings of relief? My guess is that it could have something to do with pitching out of the stretch and out of jams, in particular – something relievers need to be able to do.

Surely, 33.1 innings of professional baseball is an extremely small sample, but his strand rate (LOB%) during that stretch (52.3%) is extremely low. Maybe, the Braves saw something that they felt was unfixable and decided to cut their ties and losses early on. Similarly, maybe the Cubs saw the same thing but felt better equipped to address the issue. If so, the suddenly fantastic FIPs, control and strikeout rates become all the more intriguing. I’m not sure on the stuff or velocity, but it’s also possible – indeed, likely – that Cubs scouts saw some upside there.

It’s not yet clear at which level Brocker will begin his career with the Cubs, but we should find out soon enough. For now, we have another interesting relief prospect to follow who has shown flashes of potential in the past.