Video Board Envy: Cardinals Improving Theirs to Keep Up with the Cubs Skip to content 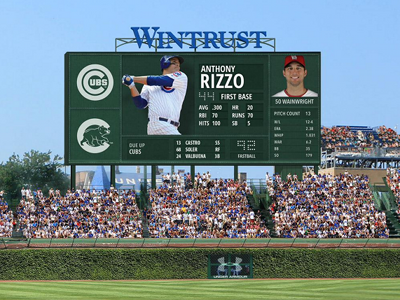 The St. Louis Cardinals are adding two fancy new video boards to Busch Stadium, and who does that sound like, eh?

I’d be kind of kidding about linking the additions to the Chicago Cubs and their two fancy new video boards if not for the fact that, seriously, that’s actually part of the reason.

“But we did get upset actually when the Cubs had a better video board than us,” Joe Abernathy, vice president of stadium operations for the Cardinals, told MLB.com. Especially with how it ended [in the National League Division Series] and all they’re doing now, we don’t want to be sitting behind the Cubs in anything.”

That sound you hear is the last remaining hold-outs giving up their fight against video boards at Wrigley Field. I say get even BIGGER BOARDS! TEN TIMES THE SIZE OF THE NEW BOARDS AT BUSCH! MAKE WRIGLEY FIELD ONE GIANT VIDEO BOARD! THE CARDINALS WILL NEVER BEAT THE CUBS AT VIDEO BOARDING!

OK … that’s probably a bit too much.

In all seriousness, the move at Busch makes a lot of sense, because their boards had become fairly outdated in the ten years since they were first installed, and you can read more about it here. The Cardinals are also improving their stadium Wi-Fi, which is an area that the Cubs will be working to improve during the ongoing renovation process. Last year, it was absolutely brutal to try and get cell data service at Wrigley during the game, let alone Wi-Fi.

Try as they might, though, the Cardinals will never quite catch up to the Cubs, because they won’t have a Kyle Schwarber home run ball on top of their video board.