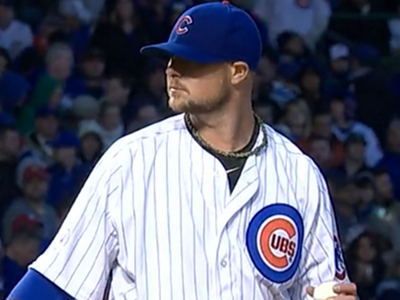 I was reading this excellent, thought-provoking Eno Sarris article about aging curves and Dallas Keuchel’s pitching plate discipline numbers, and that made me start to think about zone and contact rates for Cubs pitchers. Thinking is neat!

So I took a scan and noticed that Jon Lester was out of the zone quite a bit more often in 2015 than he was the previous two years (indeed, his 40.9% zone rate was the second lowest season of his career), and, although batters didn’t swing at those pitches as often as they had in the past, they whiffed at them a ton more (62.2% out-of-zone contact rate was his best since 2010).

That’s all a very good thing: the more you can work outside the zone without walking guys, getting more whiffs and weak contact, the better. In Sarris’s article, though, one thing you see is a theory developing that pitchers who see sharp upticks in being out of the zone in a given season tend to be back in the zone more the next season, as batters increasingly lay off, which then reduces whiff rate and overall results.

I asked Sarris if he thought what I’d noticed in Lester’s rates meant regression was coming, or if Lester’s in a different situation than most because he’s an established veteran with a wide-ranging repertoire. Sarris suspected there’d be some regression on that particular point (pitching out of the zone and inducing more whiffs), but the tricky thing is, Lester’s performance in 2015 was just about even with 2014 (i.e., both excellent, despite significant plate discipline differences) … so maybe no overall performance regression? As in, maybe Lester will just get the job done with fewer whiffs on pitches out of the zone? Because he’s really good and that’s what he does? He’ll just do it in a different way? But what way? (Starts thinking again … still neat!)

The whole point of all of this isn’t so much to land on a conclusion, but is instead designed to get you (like it did for me) thinking differently about evaluating past pitcher performance and projecting future pitcher performance.

I’ll admit I never once thought specifically about how aging impacts the interplay between a pitcher’s volume of pitches in and out of the zone, and then the relationship between that and whiffs, and then the relationship between that and results. That chain of thinking is really interesting, and it reminds me that there are so many other chains like that out there that we haven’t explored.