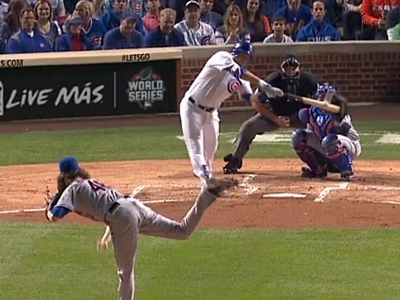 One of the more fun factoids we’d all shout out there during games last year was the exit velocity of a particularly well-scorched ball.

Technological advances have increasingly allowed fans to marvel at these numbers, which is it’s own fun enterprise. But doing so without context leaves the whole thing mostly stuck within that “fun” zone, and we know that exit velocity can mean a whole lot more.

Indeed, exit velocity is highly correlated with offensive production on batted balls. That makes unspoken sense, really, because the harder you hit the ball, the more likely it is to find open space, as the defenders have less time to reach it. Additionally, the ball tends to go farther into (or out of) the field of play, where there is more open space.*

As I was thinking about these things, I started checking out the velocity charts at Baseball Savant, and wanted to see how the Cubs’ expected positional starters compared against league average exit velocity in 2015. You can check them out below, with some commentary on each.

(Thanks to Michael for his help in collecting the charts, and I strongly encourage you to click over to Baseball Savant on each player if you want to check out much more data on each guy. Note that the charts list the dates as in 2016, but they are for the 2015 season.) A surprise right off the bat, as I would have expected Rizzo’s exit velocity to more regularly best the league average mark. Then again, when you think about what you saw from Rizzo in 2015, he wasn’t always crushing the ball. Yes, he could hit the ball a long way, and he got on base at a huge clip. But he also hit more fly balls than he had in the past (43.6% rate was his highest with the Cubs), and the percentage of those fly balls that were within the infield (10.4%) was also the highest of his time with the Cubs. There are very good reasons to go for fly balls, especially for a batter with plus power (and not a lot of speed) like Rizzo. But maybe it reduced his exit velocity a little bit last year? I’m just kinda searching a bit at this point.

Regardless, let Rizzo stand as the example that, while high exit velocity is generally a good thing, it’s not absolutely required to be an extremely productive hitter. The Cubs’ incoming second baseman dealt with some knee issues last year, and was down defensively (according to the advanced metrics), but his bat didn’t suffer – his .276/.359/.450 line was extremely strong, and his 123 wRC+ was his best since 2012. And as you can see, he routinely hit the ball harder than the average big leaguer. This is actually exactly what I expected to see for Kris Bryant, given his approach, which sells out max contact in favor of extremely hard contact. Some weeks, he hit a whole lot of rockets, and other weeks the ball was just missing the sweet spot (or missing his bat entirely). It works for him, clearly. Also about what I would have expected for Addison Russell, though I’m wondering what that late-season trough is about. Dips later in the year are to be expected as the body wears down, but that’s pretty extreme. Maybe that’s a demonstration of a younger player wearing down more significantly than more veteran players? You’d kind of expect that, wouldn’t you?

I remain very excited about Russell’s offensive potential, by the way, and I saw all kinds of signs of encouragement from the 21-year-old (who’d played just 14 games at AAA in his career) in 2015. And that’s to say nothing of what appears to be an elite glove. Are you the least bit surprised? Kyle Schwarber just flat-out rocks the ball. He swings hard, he barrels the ball well, and he hits lasers. I love seeing this from another new-coming Cub. You might not think of Jason Heyward as a ball-crusher, but he really is. As we know, it’s just that he doesn’t necessarily elevate the ball all that much.

Heyward is a great offensive player as is, so far be it from me to suggest any kind of wholesale changes to his approach or his swing. But you have to admit: it’s impossible to look at that chart, to think about his huge groundball rate, and not dream about what could happen to his power numbers if he were able to get just a little more lift. I always think of Soler as THE guy who absolutely crushes the ball on the Cubs (remember that time he nearly decapitated Taylor Jungmann?), and generally that was true in 2015. The injuries show up as gaps, but generally, Soler simply hits the ball harder than most players. Sometimes MUCH harder.

Small sample size warning, but I’m looking at that last stretch – which looks a lot like Kris Bryant’s chart, eh? – and I’m remember how much more elevation Soler was showing at that time. His swing looked to be a little less uppercut-y, and looked to be generating more backspin. That might not have anything to do with anything, but we’re still having a good time here, so I thought I’d point it out. There’s a pretty clear trend there for Miguel Montero, with his exit velocity trending downward as the season went on. That could be a sign of wearing down – which, again, is to be expected – and did seem to happen a bit with him later in the year. Keeping Montero fresh by rotating Kyle Schwarber in behind the plate every now and again (in addition, obviously, to David Ross) could be very beneficial later in the year.

*(Additional fun, and support for the idea that huge exit velocity usually means huge offensive numbers: check out the data below the charts at Baseball Savant for each player, because you’ll see that the balls they crush tend to be hits. Fun fact: Kris Bryant hit the ball harder than 110mph last year five times, and all five times he got a hit. I’m assuming defenders would voluntarily move out of the path of that ball.)