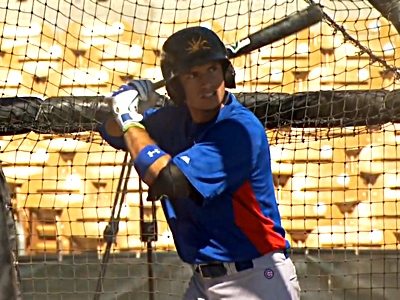 Chicago Cubs prospect Albert Almora had an up and down 2015 season, though there are reasons to be very encouraged heading into 2016. And, indeed, one methodology for ranking prospects has him as the best in the Cubs’ system.

Because he was the first draft pick of the new front office era, because he was immediately surrounded by elite – older – positional prospects who flew through the system, and because his game is more defensively-oriented than some of the Cubs’ positional crew, Almora’s been easy to lose sight of over the past few years.

Although debate about his future will persist unless and until he emerges as a regular at the big league level, Almora remains squarely within the Cubs’ top group of prospects. The bat has latent power, and could be at an elite contact level. The glove is special. The makeup is extremely strong.

I think many forget that he’s still just 21.

As part of MLB’s Rookie Career Development Program, top prospects from the various organizations come together for sessions on life in the big leagues, preparing for success, etc., and Almora has been in attendance. There, Jonathan Mayo interviewed him about his 2015 season and his record-setting experiences with Team USA baseball.