More Love: The Cubs Have Top Infield in Baseball Skip to content 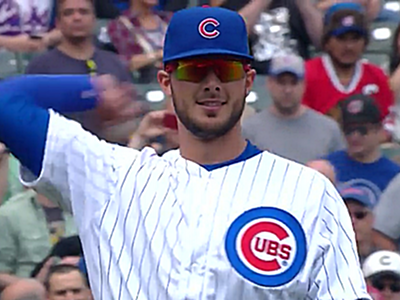 But the Cubs did make some significant changes in the infield, as well. The team moved Starlin Castro to New York and acquired Ben Zobrist via free agency. With the returning rookie of the year at third base, a potential gold glover at shortstop and a perennial MVP candidate at first base in addition to Zobrist, the Cubs infield projects to be at least as exciting as their outfield.

In fact, by at least one account, the 2016 Cubs have the top infield in all of baseball.

That’s right, in addition to ranking the Cubs starting rotation as fourth best in baseball, ESPN has identified the Cubs as the best starting infield in MLB, just ahead of the Giants, Royals, Blue Jays, and Rangers. After that, by the way, only one more NL team (the Cardinals, 6th) is even on the list. According to the Steamer projections, the collective Cubs infield should be worth 15.4 wins above replacement in 2016. And, although the Blue Jays are somewhat close (13.1), the Giants (10.8), Royals (7.3) or Rangers (8.9) are definitely not.

Citing the multiple awards, fantastic 2015 seasons and positive future projections of each of the four starters, Buster Olney is confident that the Cubs infield will steal the show in 2016. One particularly important contribution from Ben Zobrist, in Olney’s opinion, is his ability to hit lefties well. That could help elevate the game of Rizzo* and Schwarber, who could face southpaws less often with Zobrist in the lineup. For comparison’s sake, Starlin Castro has a career .330 wOBA against lefties, while Ben Zobrist sports a career .358 wOBA.

You have to be an ESPN insider to get the full list and write-up, but it’s an interesting read. So, check out the article here for more on the Cubs and the other teams on the list. In Olney’s closing paragraph, he confirms something we’ve probably all felt to be true: even if this group wasn’t the best set of infielders in baseball – which he is sure that they are – they’d have a great time playing together because they are all similar in personality and professionalism.

It’s easy to like your favorite team when they’re good; it’s even easier when they are all awesome dudes, as well.

*[Brett: Not that it’s bothered Rizzo in recent years.]